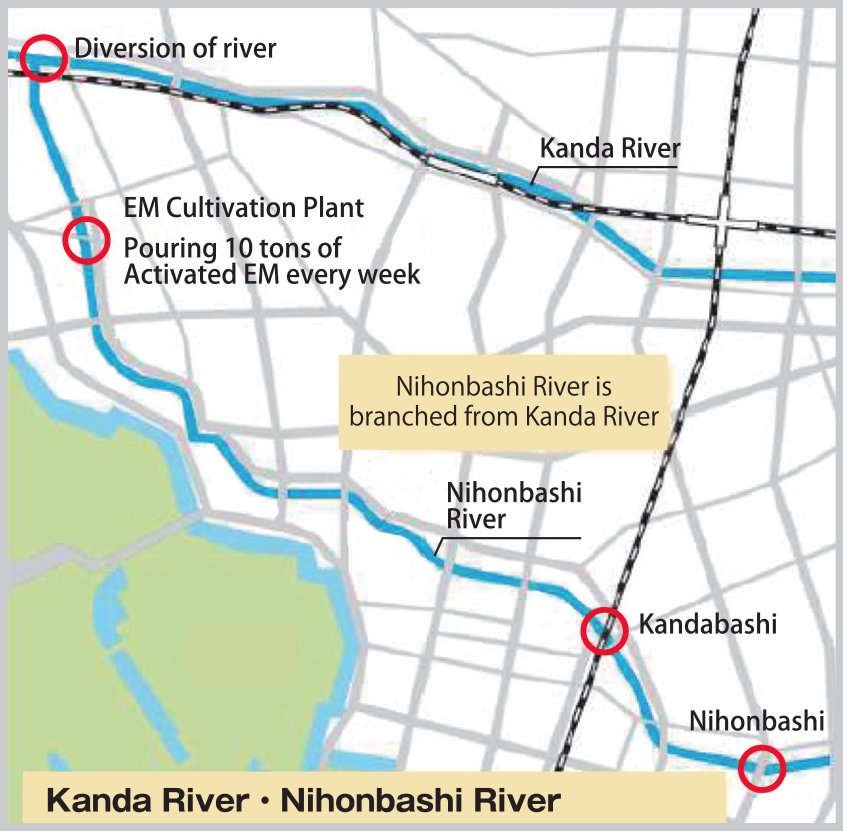 Nihonbashi River, which separates from the Kanda River near JR Suidobashi station, is a first-grade river of 4.8km in length that flows into the Sumida River. The river was dug in the early Edo period, and the river was the main line of logistics to support the city of Edo. After World War II, although people still could swim in the river, during the period of high economic growth it steadily grew polluted. Further, after it was covered by a highway, it became less a part of people's daily lives. The original starting point of Japan's road system, the landscape of "Nihonbashi" is severely hampered by the highway. People are proceeding with a plan to recover the blue sky over Nihonbashi by dismantling the overpass.

In June 2006, three organizations: the Historic Bridge "Nihonbashi" Preservation Society, the Nihonbashi Corporation Association and the Nihonbashi Rotary Club decided to implement a project to clean up Nihonbashi River with technical support from U-net (United Networks for Earth Environment, NPO), and looked for a location to install Activated EM production equipment.

Chiyoda-ku decided to rent a place where the 20 town councils and corporate wards founded the "Revive Clean Water in Nihonbashi River and Kanda River Group". Here, they started the construction of an Activated EM production facility in September 2006, and was completed in December of the same year.
Changes in biodiversity recovery of Nihonbashi River

Although there were originally a variety of living things in the Nihonbashi River, since most of the water source is sewage treatment water, the water quality is not stable, depending on the weather, the opportunity of encountering living creatures was rare. In the wake of applying EM to the Nihonbashi River, we began our own study of the river, which is still ongoing. According to this study, we found that the frequency of encountering living creatures in the Nihonbashi River has increased, and that the variety has also grown.
Continue reading how this proyect changed the area.