#128 Understanding the application of seawater and salt in crop cultivation

#128 Understanding the application of seawater and salt in crop cultivation


In the previous article #127, I mentioned the prevention of disasters by using EM Technology. In this regard I received the following message from Ms. Retsuko Sugimoto, who has been actively utilizing EM for the entire region over the past 20 years, with the goal of making the sea in Amakusa full of coral reefs. This message is confirmation of the effect EM has in dealing with disasters that I mentioned last time.

In her letter, the ultimate plan in Amakusa is already in focus, and they are at the point of making Amakusa an EM paradise in reality. The utilization of activated EM solution made with seawater is particularly important, as is creating energy barriers through use of black concrete that utilize EM rectifying charcoal, turning the area into a special spot filled with energy. (These rectifying blocks are commonly called Blacon, an abbreviation of “black” and “concrete.”) In the future, many stakeholders will make use of this results, so I have included my comments in the hope that this will be used as a reference for EM stakeholders. 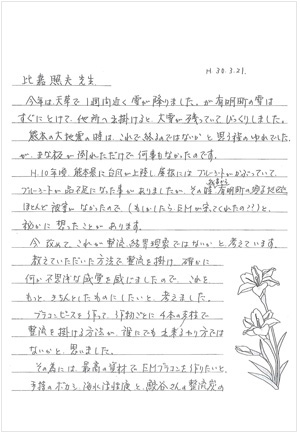 It snowed for about a week in Amakusa this year. The snow in Ariake Town melted quickly, but when I went to other places, I was surprised to see the heavy snow still remained. When we had the big earthquake in Kumamoto the ground shook so much I thought this would be the end for me, but actually other than a cutting board falling down, things were fine.

A typhoon hit Kumamoto prefecture in 1998, and blue plastic sheets were wrapped around many damaged roofs, so many that there was a shortage of blue plastic sheets, but at that time there was little damage to our house and to the Suji area of Ariake town, and I thought to myself that EM might have protected us.

I now think that this must be due to the rectification barrier phenomenon. I created a rectified barrier the way I had been taught and did indeed have a sense that something unusual was at work, so I wanted to maximize its effectiveness. I thought that the method of making EM black concrete blocks and rectifying crops with four supporting pillars was a method that anyone could follow.

I wanted to make EM black concrete blocks with the best materials, so I asked to have wave measurements done of the EM bokashi that I had then, the activated EM with seawater solution that I used, as well as the rectifying charcoal provided by Mr. Sameya, in order to create the most effective blocks.

I enclose a table of the results of the Hado measurements.

According to Mr. Yamashita’s advice, it is best to use good quality soil, and I know places where good soil can be obtained here, so I believe that I can make high quality soil.

The soil here in Amakusa is full of stones like a dry riverbed, and there is also red soil, but most of the soil is similar to a coastal sandy beach. It is entirely different from the soil in the Aso and Kikuchi regions. I had the idea that since Amakusa means “grasses in heaven,” that has the meaning of God’s vegetables, which in turn means organic vegetables.

I am grateful for the blessings of the Amakusa sea, and if agriculture without using any pesticides can become a reality by using seawater, I think that it can help the people in Amakusa. The soil after pulling out the cabbages felt very soft and pleasant, so I planted daikon radish seeds right then and there. At this time of year daikon radish seeds take a considerable time to germinate, but I noticed they had nicely germinated in only a few days.

This year, I want to learn about EM farming again, so I plan to have a two-day workshop on the basics of EM farming, with Mr. Iwase from EM Seikatsu, Inc. as an instructor. Last year, Mr. Tsuneharu Yamakawa, who attended a training session in Okinawa, contacted me about his desire to set up a rectification system in his tangerine orchard. I asked Mr. Iwase to conduct an EM farming workshop on March 14th and 15th. I also asked him to visit the site before he left and draw up a plan. The plan has just arrived.
Since we want to make it succeed, we would like to implement the plan gradually step by step after making EM black concrete blocks.

Mr. Yamakawa is a full-time tangerine farmer with orchards in many locations totaling over 20,000 m2 but we would like to try it first in two fields. We hope that you can provide us with EM rectifying stickers for use in this project.

I gave Mr. Yamakawa four of the stickers you provided from last year, but if possible this time I would like to try one bottle per tree. The fig tree I tried this with is undamaged by crows, so I am thinking about binding a battery on a plastic bottle to the tree. I would very much appreciate any additional advice you might provide.

I am interested in utilizing activated EM solution made with seawater, so I did two kinds of experiments.

1. Does it work as fertilizer? (experiment with cabbages)

• I planted the same seedlings on the same day.

• I applied a 1:1000 solution of activated EM solution with seawater to both, but I didn’t notice any particular results.

• I sprayed a 1:50 solution of activated EM solution with seawater using a watering can.

• Since the cabbages didn’t wither, I sprayed them four times.

• Clear results were seen with cabbages sprayed with a 1:50 solution activated EM solution made with seawater.
2. Does it work as a measure against insect pests? (experiment with cabbages)

• There were more insects than usual, and the cabbages that I could not go to inspect for a couple of days had lace-shapes insect damage.

• I thought that I would give it a try, even though it might not work, and sprayed plenty of EM stock solution on top of the plants using a watering can.

• Since they didn’t wither, I continued to spray the stock solution a couple of times, while checking them, and then they started to form solid heads at their core.

• I asked Mr. Hiroshi Yamashita to measure the Hado of the cabbages and it showed +15.

• There are things I don’t fully understand about how to apply activated EM solution with seawater, the optimum strength of the solution, etc., so I would appreciate it if you could give me any feedback and advice.

My experiences so far are as follows.

• When I used activated EM solution made with seawater for cucumbers, a lot of flower buds appeared, but the plants were not fruitful.

• This may be due to my lack of knowledge.

• Sweet peas did not grow, and I think it was too early to plant them in the soil after I buried food waste treated with activated EM solution made with seawater.

• I sprayed activated EM solution with seawater over snap peas, but they turned white and were not healthy.

• I think for cucumbers and peas it is better to use the original activated EM solution without seawater (in the beginning stages).

• I think that it is very effective for cabbages, Chinese cabbages and Daikon radish.
I often have a mental image of a young mother growing vegetables for her family in a small 1 tsubo garden (1 tsubo= just over 35 sq. ft.), composting food waste and weeds and returning these to the soil, and her family enjoying eating these vegetables and the energy they get from them.

Thank you so much. 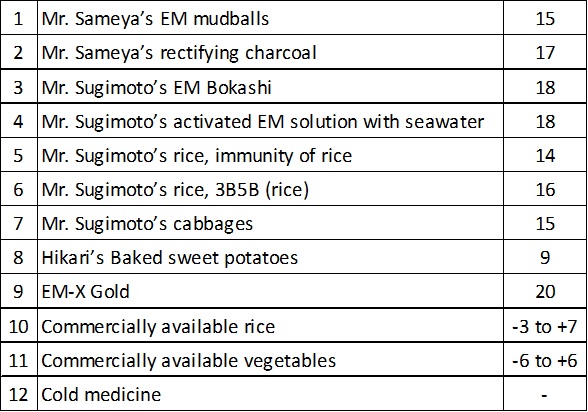 The main point of my comments is that one shouldn't just add EM farming methods that use sea water or salt well onto traditional agricultural methods, but use EM, salt, charcoal and rectifying stickers to practice cultivation that requires no tillage, no weeding, no pesticides or fertilizers, and that leads high yield, high quality crops, to make the whole field rich and full of healthy soil, the premise being to make the field itself a source of environmental remediation.

[Below are my comments for Ms. Sugimoto]

I suggest you carefully read the information on the amount of salt in Eco Pure. As I introduced in article #120 of the Ecopure series, beans are particularly vulnerable to salt, so the standard is to use one-third to one-half the usual amount of salt.

As shown above, root vegetables with roots that do not grow horizontally, like Chinese cabbage and cabbage, are quite salt tolerant, but the way of thinking about this is fundamentally wrong. For details, please refer to the Web Ecopure series articles #117 to #121, #124. Seawater by itself is the same as an herbicide.

1. Initially spray seawater repeatedly, and let all the weeds wither. Almost flood the field in seawater.

4. Plant after two weeks. When sowing the seeds, it is good to do it after rain; otherwise make sure to water them well.

5. After creating an EM barrier in the field, spray a 1:100 dilution of activated EM solution made with seawater using a watering can, etc. so that the whole area is wet. Spray 30 to 50 liters per 1,000 m2. Repeat this every day, and it will improve as often as you apply it.

6. If you find weeds, put a pinch of salt on top of them.

7. Use food waste after immersing one to two days in a 1:500 solution of EM in seawater. There is no need to compost it and no need to use EM bokashi.

8. We only provide EM rectifying stickers for experiments, but for farmers it is required that they first join U-net (United Networks for Earth Environment). (Be sure to return whatever benefits you receive to your community.)

If you add EM to seawater to make a 1:1000 dilution, and it is not so concentrated that it causes damage, and you apply this often, there will be a high correlation between the amount of salt and the yield and quality.
(April 3, 2018)