Two full years have passed since the March 11, 2011 Great East Japan Earthquake. An NHK survey reveals that 65% of people already view this disaster as an event in the past. Naturally enough most of the problems that remain are too much for volunteers to handle alone, so the role of the government has become crucial.

When the earthquake took place I publicized—in this site, the DND site, and other venues—information regarding the use of EM in sanitation and desalinization measures, and other EM application methods in the affected areas, and countless volunteers have used this information as a guide to help in these efforts. As I have mentioned many times, this information was collected in the volume The Law of Syntropy, published by the NPO foundation U-net (United Networks for Earth Environment).

Through this disaster the Japanese have experienced the way things operate in our country, namely that the best methods are not always immediately put into practice. In a company, executives’ decisions have immediate effect, and through this process even more effective methods are collected, with solutions found by a continual adoption of improved methods. This is the usual way of doing things in a business.

The structure of government, in contrast, follows the rule of law, has to come up with an approved budget, carries out plans under elaborate rules and regulations, and allows for no exceptions. Top public officials do not have the same level of authority as company executives, and in emergencies can only make a limited, minimal response.

Normally this structure is very efficient and stable, but in emergencies, and when new elements are introduced it functions as a major obstacle. Further, in order to prevent corruption and improve networking, public officials are often moved to different posts every few years, and the structure makes it difficult to develop specialists.

Because of this, when new problems arise officials gather so-called experts, hold endless meetings and come up with compromise solutions; these solutions, too, get caught up in various legal restrictions and are far from what really needs to be done.

Also, since politicians and public officials are constantly changing, no one takes ultimate responsibility. Only when the causal relationship is clear and a court has handed down a decision is legal responsibility taken, but in most cases by the time a decision is reached most of the people involved (the victims) are no longer alive.

In addition, since our country has a strong centralized government bureaucracy, the budget that the government decides on is applied at the prefectural, city, town, and village levels in ways determined centrally, and it is impossible to change these plans at the local level. No matter how good an idea might be, anyone at the local level who changes these plans will be charged with breaking the law. There is an increased call for decentralization these days, but breaking this barrier is no easy task.

The only ways to change this structure are to win elections and reform politics or have a revolution to overthrow it, but either of these is like waiting for a miracle.

Since from the beginning EM exhibited an unbelievable power, it has been entirely blocked by this governmental barrier, and dragged into an endless battle with a numbing array of stereotyped thinking and vested interests. So the choice that has arisen from this is a kind of third way, relying on selfless volunteers to change the world.

Still, nothing can be accomplished without financial and human resources. The International Nature Farming Research Center, the EM Research Institute Co., Ltd., EM Research Organization, Inc., and EM Life Co., Ltd., which distributes original EM products, have played a crucial role in linking up with NPOs and volunteers in order to spread EM use throughout society. There are now several thousand organizations that are intentionally using EM, over 15% of Japanese schools make use of EM in some form or another, several million people are using EM, and the number of local governments actively using EM is increasing.

Because this system was in place at the time of the Great East Japan Earthquake, we were able to respond adequately, but the problem is measures taken to counter radiation in Fukushima. As I have introduced often in this magazine, EM has had unexpectedly good results in dealing with radiation, but as I have explained, in order for it to be accepted by the governmental structure we have to compile solid results with EM and wait until the established methods have been allowed to run their course.

Even now, twenty-seven years after the nuclear accident in Chernobyl, fundamental solutions to their problems have not been firmly established. The Institute of Radiobiology, National Academy of Sciences of Belarus, the nation that suffered from the accident, has finally recognized the effectiveness of EM, and has begun to apply it as part of national policy. The past two years have shown clearly how effective EM is in dealing with radiation, and by last October we had set up EM logistical centers in twenty-eight locations within Fukushima prefecture. Each center has a system to produce large amounts of Activated EM and respond to the requests from residents in each locality. Three more centers have been created since then, and several more will be set up this year, with the ultimate goal of having 40 total centers that cover all of Fukushima.

Since the beginning of this year I have visited Fukushima on average once per month and have held workshops there. I have yet to hear any negative comments, and the number of people who have great hopes for EM and have starting using it has grown. We’re in a protracted struggle that could take 20, 30, or even a 100 years, but I am confident that if we seriously incorporate the use of EM these issues can be resolved in a matter of a few years.

Still, this technology is not going to be officially adopted anytime soon, and depending on how the situation develops it may not be used at all as part of public policy. This is why we are focusing on ordinary citizens and volunteers to single-handedly deal with and solve these problems. With the achievements of the past thirty-two years, and the growth of a strong sense of unity between EM-related organizations, I can safely say that we will be able to solve these problems on our own. 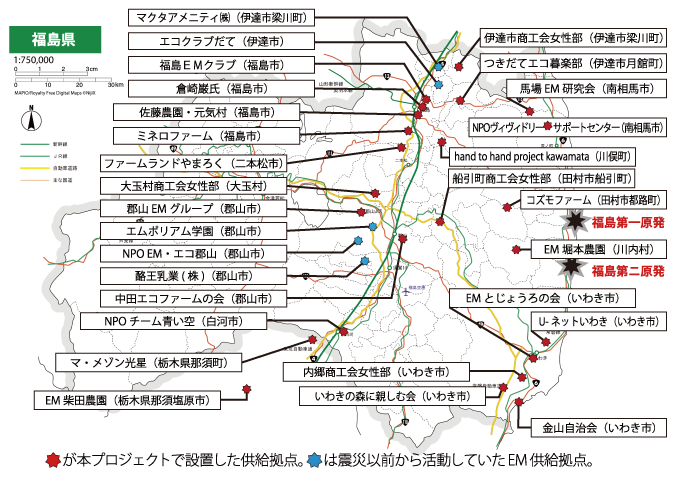