With the outbreak of foot-and-mouth disease in Miyazaki Prefecture, the coordinated throwing of EM® mud balls into bodies of water as part of Ocean Day, and the COP 10 meeting, last year was a landmark year as far as EM® was concerned. Not only the Ministry of Agriculture, Forestry, and Fisheries, but many prefectures, cities, towns, and villages also recognized the need to vigorously apply EM Technology®. This year is the 31st year since EM Technology® was developed in 1980, and the 29th year since active efforts were first made to disseminate its use.

The verdict of time is quite strict, and the majority of the people who first opposed EM® most strenuously have since retired, with many of them now deceased; those who remain have had to recognize the effectiveness of EM•1®, and some are even now enthusiastic users. There is also an ever-growing groundswell of gratitude among the majority of those volunteering in EM® activities, gratitude that EM Technology® has helped make their lives happier and more pleasant. At the same time, many people who have been using EM•1® since they were children now form the second generation of EM•1® users.

Measures Against Human Influenza, Avian Influenza, and Foot-and-Mouth Disease
The new strain of influenza that appeared last year is especially virulent and led to a pandemic, yet at the largest kindergarten in Matsuyama City, where Activated EM•1® was used not only to wash hands and in cleaning restrooms, but also was sprayed both in the morning and evening, the school did not have to close because of the pandemic, a positive piece of news that lets us reconfirm EM®’s power. There were 1-2 children in each class who were infected, but their symptoms were light, and though many of the older siblings of the kindergarteners got infected, their siblings who attend this kindergarten did not.

Bird migration season is upon us, and the virulent H5N1 strain of influenza has been found in many dead wild birds. It has become clear that EM•1® has anti-viral properties to combat not only human flu, avian flu, new strain influenza, and foot-and-mouth disease, but also all kinds of viruses including the AIDS virus, hepatitis B and C viruses, koi virus, and shrimp White Spot virus.

Further, since most viruses become inactive within a few minutes within an environment below pH 4.5, a 10-100 dilution of Activated EM•1®, which is below pH 3.5, is remarkably effective in preventing infection from the most raging viruses, and even a 300-500 dilution is sufficient as a preventative. In an emergency outbreak of avian influenza, if the same measures are taken that were taken against foot-and-mouth disease that I’ve introduced in this column earlier, this will be a complete countermeasure against the disease. EM•1® is a registered and approved microbial material for use in animal husbandry. Poultry farmers in particular have publicized their use of EM•1®, and it is my hope that they will, on their own, completely handle any crisis.

In Korea, foot-and-mouth disease spread through the whole country and 400,000 hogs and cows have already had to be put down. In Japan, the power of EM®’s infection prevention barrier allowed us to successfully contain the outbreak to Miyazaki Prefecture, but if we consider the situation in Korean it’s not impossible that large amounts of the virus will travel over to Japan on the north wind, and since over 10,000 people travel daily between the two countries, we must remain vigilant.

Accelerated Development of Developing Countries and the Impoverishment of Advanced Countries
With the end of the Cold War the age of ideology ended and, with a few exceptions, information and capital now race through the entire world. Because of this we are moving steadily toward a worldwide leveling, and with the FTA (Free Trade Agreement) and the TPP (Trans-Pacific Partnership), the elimination of tariffs is just a matter of time. The development of educational technology means that, in a short space of time, differences in intellectual levels between various races is being corrected, and capital has been rapidly flowing out of high-cost, developed countries to less-developed countries where the populations are high and wages are low. Needless to say, this has led to increased unemployment in developed countries, lower wages, and an increase in the number of nations with an aging population and declining birthrates.

This kind of equalization process involving the world’s population is, in a way, inevitable, but when problems arise they cannot be solved through an extension of these methods. Just as with human illness, these problems are found in individual and societal lifestyles and leads us to a kind of digital addiction.

The word digital has many meanings, though originally it meant the subdividing of broad electrical waves used for communication purposes so that information could be transmitted through them much more efficiently. In the digital realm nothing is left vague, and like the way powerful chemical fertilizers and agrochemicals are created through the application of theory, and synthetic medicines produced to replace herbal medicine, everything can be turned into data. In a broad sense this is what is meant by digitalization.

In the world of science, since reproducibility is important, it is necessary to digitalize and establish scientific evidence, but because problems of actual society, living bodies, and the environment involve highly integrated and multi-layered information, and thus are constantly changing, in these areas it is extremely difficult to digitalize. For example, even if information is digitalized, because of changes in values and ways of thinking it can be unusable in an instant and, like public support for the government, can shift on a whim.

Since cause and effect is quite clear cut in the digital realm, it is easy to clarify where responsibility lies, and thus people who are victims of what I call “digital syndrome” spend half their lives seeking to pinpoint responsibility, or attempting to avoid it. Further, even in cases where each person should take individual responsibility to deal with matters, it is possible, depending on how things are expressed, to endlessly seek to pinpoint responsibility; thus, in the name of security all sorts of budgets are set up, and before one realizes what is happening, an expensive infrastructure is in place and the avatar of the digital world, an addiction to money, appears. People begin believing that they can’t do a thing without money, and that if only they had money they would be able to solve their problems.

The core of the EM® movement is this: to apply EM Technology® to global human problems—problems of agriculture (food), the environment, medicine and health, energy resources, and education—and in a safe, pleasant-to-use, high-quality/low-cost way, solve these issues in a cumulative, sustainable manner, while creating a future model for an information-intensive society of co-existence and co-prosperity. In other words, to build a society where there is a high level of contentment.

The starting point for all this is the regenerative power in EM Technology®, namely its syntropy effects. If this technology is pushed to its limits, as long as the sun’s light continues it is possible for all pollutants to undergo a dimensional change to become energy sources, for radioactive materials to be diluted to levels harmful to humans and returned to the soil; if EM Technology® is applied these can even be utilized as new energy fertilizers. This became clear in the area polluted by the Chernobyl radioactive spill, where the use of EM Technology® in agriculture led to harvests of wheat and corn that had more than twice the previous yield, with no detectable levels of radioactive materials in the crops.

The impoverishment of advanced nations reveals the limits of capitalist, digitalized societies that use money and influence as indices. The basic solution to this is found by--through the regenerative technology of EM®--creating a lifestyle and social structure that use the least amount of money. Along with existing health practices that promote metabolism, if one thoroughly enjoys an EM® lifestyle, one that makes use of EM•1® as freely as the air and the water, it will not be difficult to reduce medical expenses to under a fifth of present amounts.

This extra savings will make it possible to repay the massive debt the country has, and if EM Technology® is used in road and building construction, the expected lifespan of these can be increased ten times; depending on how they are managed, it may be possible to use them almost indefinitely. Not only will the application of EM Technology® save energy and develop functional materials, but the regenerative recycling technology for all kinds of waste material will, in an efficient, energy-saving way, produce high quality materials. Further, through agriculture, nature will be actively protected, natural resources will be abundant, and people’s health can be maintained at fundamentally sound levels.

That being said, at present, when the structure of society and individual people alike have fallen victim to this “digital syndrome,” we need to move from a way of thinking that blames other people and society, and enhance the sense of people taking personal responsibility and contributing to society. We need to change to the sort of life in which people solve their own problems, which will result in a way of life that, directly and indirectly, contributes to society. Never getting ill all one’s life, taking good care of things and using them for a long time and functionally, having one’s daily life actually help clean the environment, thus making the natural ecology more abundant, are all very important ways of contributing to society. If, while using EM•1® as freely as the air and water, one masters the use of EM Technology®, it is possible to solve many intractable problems in an enjoyable, creative way. In addition, if an overall synergistic effect on everything is increased, and people have an appreciation of the analog approach, mankind will take one step towards evolving toward God.  It is my hope that all of your EM®-related activities this year will take a great leap forward. 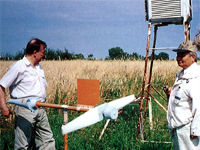 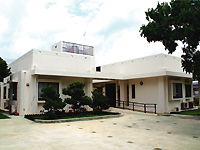 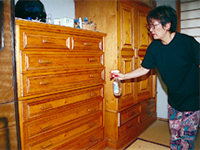 A concrete dwelling that makes extensive use of EM Technology® (Okinawa)