#55 The Law of Syntropy (Revitalization)

We are at the beginning of a brand new year, 2012. Last year saw a number of devastating natural catastrophes throughout the world including the Great East Japan Earthquake and the massive flooding in Thailand. The world also experienced the economic crisis in the euro zone that started in Greece, and the Arab Spring uprisings that arose out of the Jasmine Revolution. These were unexpected natural catastrophes and major events that no one had anticipated.

My apologies to those who suffered from the natural disasters, but considering the population density and scale of the catastrophes, the number of casualties was surprisingly low, and the speed of recovery has been amazing. Also, with the euro zone and elsewhere there has been a temporary respite that has allowed for a re-evaluation of the world financial system. One can say that both have been the gifts of information and the freedom of action that accompanies it, but up until now the natural and manmade disasters we have experienced have posed an enormous challenge to mankind.

The old, existing system, based on confrontation and competition, has ossified in its attempt to protect the vested interests of various organizations, and has blocked society from moving in a more productive direction. Even in an age of a sophisticated information and increased freedom, when there are no issues that cannot be solved, there are still many regulations that inhibit political, economic and social activities, all of which are a direct factor in producing a structure that keeps costs high.

Industries such as agriculture, medicine, electricity and alcohol are so over-regulated that newcomers cannot enter these fields; there is no hope that they will develop, and these industries have become major burdens to the nation. If businesses, for instance, could freely enter the field of agriculture, employment in farming communities would increase, there would be no more unused farmland, a greater degree of food self-sufficiency, and Japan could readily become a major exporter of agricultural products. In our present IT age, if the medical field, too, became more open, higher quality medical care could be delivered more cost effectively, and overall medical costs could easily be lowered to under one-third their present level. As part of the amazing technological innovations taking place now, if restrictions could be lifted on electrical power production, we wouldn't have to depend on nuclear power at all, and in the field of alcohol production, too, and many other fields, a lifting of restrictions would free these industries to make great strides.

The dramatic victory of the Osaka Initiative made use of the veto power of citizens to effectively counter the structural deficiencies in the existing political and government system, which is resistant to change. This victory reveals the limitations of existing ways of dealing with finance and the economy, and ushers in a period when change must occur. This situation is directly connected to the upgrade in information and the increased freedom people now have to make the best possible choices; the end result will be an advanced information society, one in which safety, comfort, low-cost, high-quality and cumulative sustainability will be found in all fields, and this will lead to a society based on coexistence and co-prosperity, a society in which people attain a high level of happiness. We have no other choice.

The Publication of The Law of Syntropy (Revitalization) 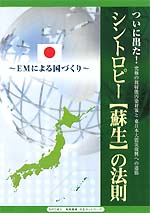 In late October of last year a book of mine entitled The Law of Syntropy (Revitalization) was published by United Networks for Earth Environment (U-Net). This book focuses on the most amazing case studies in which EM was used in the Great East Japan Earthquake, and is subtitled Rebuilding the Country through EM. The catchphrase used in advertising for the book is: At last! A remarkable way to deal with radioactive contamination and rebuild after the Great East Japan Earthquake.

We have sent copies of the book to every member of the Japanese Diet and to mayors of the cities, towns, and villages in the effected areas; some 10,000 copies have been sold already and it's gone into additional printings. I hope very much that politicians and local administrations will make use of this book; in the meanwhile, our EM Group has been moving forward steadily with our EM Project to help rebuild the areas affected by the earthquake, promoting efforts to make EM part of everyday life of communities as we aid in long term reconstruction efforts.

All profits from this book will go to the EM reconstruction project, and these profits are already being used in dealing with radioactive contamination in Fukushima. We have set up 15 Hyakubairiki machines (EM1 Activation Units) and created a system to produce large amounts of Activated EM1. Including all sites that were already operational, there are now over twenty sites producing Activated EM1, and they are having great success.

In early December the major distribution company AEON Co Ltd announced that it would not sell any goods in which even a very small amount of radiation was detectable. This courageous decision helped wipe out the ambiguous safety standards set by the government, and the measures to deal with radiation using EM clearly reinforce this decision by AEON.

As I reported in the last issue, without exception agricultural products grown using sufficient EM not only do not absorb radioactive materials such as cesium and strontium, but fall below measurable levels. Therefore EM must be applied to the whole contaminated region that is the focus of the AEON announcement, not just in Fukushima but in the whole Kanto and Tohoku region affected by radioactive contamination, no matter what the level of contamination.

The word syntropy is the opposite of the concept of entropy. As I have explained numerous times in the past, simply put entropywhich can be called the principle of destruction--is the process whereby energy is falls to a level where it cannot be used, where thermal pollution is produced, the order of matter disintegrates, energy is lost, things fall apart and become pollutants. In the case of matter, there is a common thread whereby this phenomenon brings on powerful oxidation and ionization, order collapses and harmful secondary waves (lateral waves) are released.

Needless to say, EM has strong anti-oxidant properties, stops harmful chemical reactions, and blocks harmful electrical combinations. At the same time, through the action of catalytic tertiary waves (longitudinal waves), EM converts electromagnetic waves into useable energy, imparting energy to living organisms and matter, bringing about the phenomenon of revitalization. Radioactivity can be seen as an extreme form of entropy, and if one continues to apply EM, radioactive materials will not be absorbed and they will disappear, both of which are due to the syntropy (revitalization) power of EM.  [ Dr. Higa's book The Law of Syntropy (Revitalization)]

Sometimes this power won't bring about complete results after one or two applications, but this is simply because the amount of EM used was insufficient for the amount of pollution it is dealing with. Continued use will bring about the desired results. The syntropy (revitalization) power of EM is cumulative, and one needs to adopt a more complete EM lifestyle and production style, in daily life and in the workplace, whereby EM is used as freely as the air and water.

In a certain sense, the accident at the Fukushima Daiichi Nuclear Power Plant unexpectedly validates the syntropy (revitalization) power of EM. Biology has thus caused a stir in nuclear physics because of this, though most specialists are not accepting this reality.

Building on the results we have seen achieved so far, the EM Group will continue its long-term support activities, and I would like to see it serve to help expand the EM movement even further.