#144 The movie “Revival II” and the reality of Fukushima

The movie "Revival II" shows various achievements that have been put into practical use after the movie “Revival”, which introduced the possibility of microorganisms reducing radioactivity, as well as practical case studies. The scientific basis is found in the 2018 research article “EM has a remarkable effect on the suppression of radioactive cesium absorption,” published in Volume 192 of the Journal of Environmental Radioactivity. This paper was awarded Belarus’s highest   academic award. Furthermore, in 2019 our research results showing that EM reduces radioactive cesium were recognized in Vol. 29 of the Journal of Condensed Matter Nuclear Science (International Society for Condensed Matter Nuclear Science). (Photos 1 and 2)

The conclusion is that specialized international academic societies have acknowledged that these two points are true: the use of EM suppresses the absorption of radioactive materials by crops, and eliminates radioactivity. This research is the result of joint research between the EM Research Organization and the Belarusian National Institute for Radiation and Biology. As you are aware, since 1997 I have continued to insist on various suppression effects of EM on radioactive contamination based on the results in Belarus. 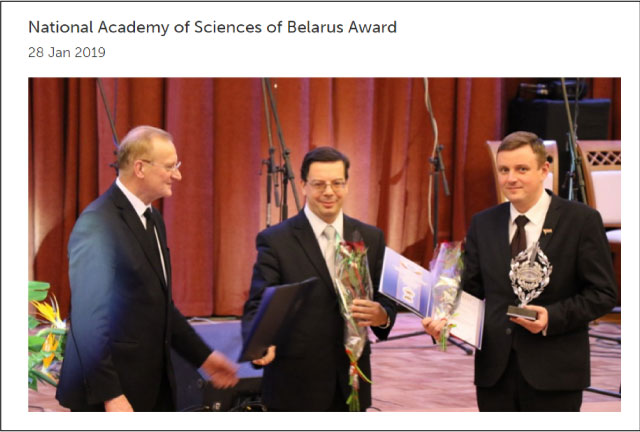 “National Academy of Sciences of Belarus Award” on Jan 28, 2019
Even though the effects of EM have been recognized in various fields, I have been labeled a pseudo scientist for claiming that EM suppresses the absorption of radioactivity and eliminates radioactivity, and there has been intense bashing of EM with criticism that, “Such false science is absolutely unacceptable.”

The movie “Revival II” introduces the progress in Fukushima and Tochigi hotspots giving many excellent examples, and explains how anyone can easily take measures against radioactive contamination by using EM. The movie also goes into the field of quantum mechanics and explores the function of the gravitons that microorganisms have, something I have been asserting.

Last year, in the 130th article in the DND series (Japanese only), I introduced “the huge graviton boundary in Fukushima,” and stated that the issue of radioactivity in residential areas in Fukushima has basically been solved through EM usage.

This year’s forum demonstrates that there has been a significant evolution from last year, thanks to these international journals acknowledging the real impact of EM.

The most important thing in quantum mechanics is the application of, i.e. entanglement (degree of mutual connection) and coherence, i.e. quantum beats (usable energy state).

Technically, this means creating a barrier and enhancing the quantum beat in a baker’s transformation. This level can generally be confirmed by an O-ring test and has extremely high reproducibility (scientific basis).

When Fukushima was checked in this way, Hamadori had the worst energy, and Aizu had much stronger hado waves. However, the difference began to decrease several years ago, and last year, Hamadori finally reached the same level as Aizu. In other words, as I mentioned in the 130th issue of the DND series, EM gravitons were spreading throughout Fukushima Prefecture. The hormesis effect (when radioactivity is rectified it becomes healthy energy) appears, and I stated that Fukushima will not suffer any health damage of the kind that occurred in Belarus or Ukraine.

A re-check of the situation in Fukushima this year shows that Aizu and Hamadori have reversed, and the residential area close to the nuclear power plant has actually become the healthiest area.

It is clear that the use of EM Technology can easily solve contaminated soil and contaminated water problems. The rest depends on decisions made by government officials.
(October 30, 2019)