EM was introduced to China in 1991 chiefly through the Nanjing Soil Research Institute, an institute at the forefront of soil research in China. The Jiangsu Academy of Agricultural Science, as well as Nanjing Agricultural University, also cooperated in this effort, and since we achieved the results we were hoping for, in 1993 we established an EM manufacturing facility in Nanjing. An EM Research Organization (EMRO) office was opened in Nanjing to supervise the facility and is now providing the constituent microbes in EM throughout China.
After this, we received the cooperation of Beijing Agricultural University (later renamed the China Agricultural University) and the agriculture division of the Chinese government, and after many twists and turns, EM is now known throughout China.

EM research in China covers many areas, including fisheries; over 2,500 academic papers have been written in China regarding EM, and many academic degrees have been awarded for EM-related research. It is only a matter of time before China becomes the leading nation using EM in the world.

Since 1991 the International Nature Farming Research Center (INFRC) has also been participating in disseminating EM-centered nature farming in China, and to further promote these activities it has, since 1995, accepted researchers from China for short-term (1-3 months) and long-term (one year) programs, and it continues to follow up in a variety of ways to help disseminate nature farming in China.

In 2006, after more than sixty Chinese researchers had completed their training, the Chinese Nature Farming Promotion Society was established, and it has held international forums on nature farming and organic agriculture in order to provide a venue to publicize individual results in these fields. The forum is held every year in April and May. Local administrations in the sites of the forums have been extremely cooperative, and the application of EM in nature farming has been steadily increasing.

After the fourth forum last year, the consensus was that, in order to further develop nature farming, it is more effective to strengthen the efforts to examine actual results in the field; thus the 2009 forum will focus on on-site technical guidance.

A Privatized Organic Farming Village in the Daxing district of Beijing.

The privatized organic farming village in the Daxing district of Beijing is recognized as being in the forefront of environmental farming in China, and over 100,000 people visit there each year. Organic materials are entirely recycled, including methane gas, which is used for generating electricity, there are research facilities and a restaurant, and the village is linked to the tourist industry and ships the majority of its produce to large stores in Beijing.

The community, with 130 hectares under cultivation, began in 1982 under a leader who had a firm belief in organic farming. The land has been jointly owned ever since and the village residents are now employees of a company that has an excellent benefits package. Not only this, but a variety of entertaining community events are held throughout the year and bring the villagers closer, as if they were a family, displaying a kind of idealized socialism in action.

The Beijing municipal agricultural division, wanting to proactively popularize the use of EM, with this privatized organic agriculture village playing a key role, has had success in two projects, both of which I saw during my visit: one using EM fermented sawdust on the floors of hog barns in Lihua village in the Daxing district, the other a case study conducted by the Academy of Agriculture and Forestry Sciences of Beijing.

The Chinese fully recognize the problems caused by residual agro-chemicals, and that they have lost international trust for their farm products, and more than ever before they are seriously coming to grips with organic agriculture and nature farming.

Recently, the use of EM in fermented sawdust in hog raising has been viewed as a revolutionary change in the field in China, and there has been an explosive increase in its use. At first, the use of sawdust to line hog pens was introduced from Japan, but within a few years this had reached the limits of its effectiveness. When farmers switched to using EM-fermented sawdust, however, all their problems were solved.

Overall it is a simple method, with the bedding made as follows: sawdust is laid out to a depth of one meter, rice bran and wheat bran are mixed in, then EM (activated liquid) is allowed to fully permeate the mixture, and this mixture is then spread out in hog pens. Once or twice a month EM (activated liquid) is injected into the fermented bedding.

Under this method, the fermented heat from EM evaporates liquid in the bedding, fecal matter is completely decomposed by EM and is no longer harmful, so all the health and environmental issues involving hog farming, starting with flies and mosquitoes, never occur, and after 4-5 years the organic matter in the fermented beds becomes excellent organic fertilizer. The pork produced contains less cholesterol, has a very high nutritional value, and as it is almost completely medication-free (the majority is totally free of any medications), the quality of the meat is outstanding.

In Shanxi Province they successfully raised 10,000 hogs using the EM sawdust method, and are building a huge hog facility that will soon allow them to raise some 40,000. The vice premier of the province, on a visit to the facility in April, had high praise for it, calling it a “revolution is hog farming in China.” Most national TV stations and the mass media have also reported on the facility’s success. The government is finally beginning to take the lead in EM in China, and I look forward with great anticipation to future developments.

Use of EM in Nature Farming and EM Sawdust Hog Farming in Jinan City, Shandung Province.

In addition to my visit to Beijing, on my recent trip I was given a chance to visit model projects in Jinan City: a nature farming community using EM, and a sawdust hog raising facility. The Jinan City project has only begun this year, but they have fully put into practice their knowledge of EM and are also producing very high quality bokashi and activated liquid.

There is much topographical variation in the 30 hectares, at the base of mountains, that is under cultivation. When I visited I gave them the following advice: “A mix of flowering trees, fruit trees, and medicinal herbs makes for a richer environment, and if you turn all the space you have (including hills and valleys) into productive green areas by using EM, you will be a model not only for China but for the world.” The privatized model farm discussed previously is entirely flat, but the land here in Jinan City has many hills and valleys, and I believe both model projects will lead the way in nature farming in China.

The experimental model being planned for the EM sawdust hog facility in Jinan City is a simpler type than that of earlier ones. Instead of first making concrete flooring, they spread the sawdust directly on the dirt, use cinder block walls, and use pipes to construct a building.

In this sort of case, if the dirt floor absorbs EM and forms a bacterial layer, that will prevent any possible contamination of the groundwater and additionally help the soil, reach its full potential. As I visited sites on this trip to offer guidance, I felt very strongly the determination within China to deal with the issues of food product safety and the environment. If this determination guides future developments, I look forward to China making a great contribution not only to its domestic agriculture but to agriculture around the world. 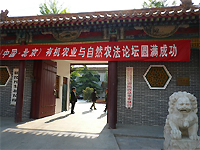 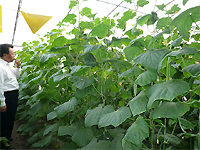 Cucumbers in a greenhouse at the organic agriculture village. 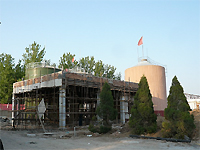 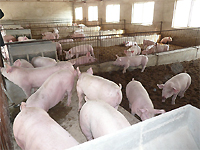 Laboratories at the Beijing Academy of Agriculture and Forestry Sciences. 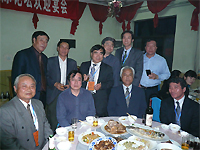 Dr. Higa with the Vice President of the Beijing Academy of Agriculture and Forestry Sciences (front row, second from the left). 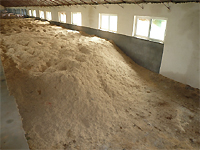 EM fermented sawdust used in hog farming in Jinan. The sawdust is over one meter thick. 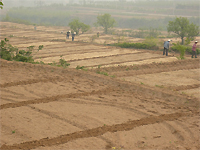 A commemorative photo taken in front of the EM fermented bedding hog facility in Jinan City.