On June 11th and 12th, EM experts from over 30 countries met at the International Conference Center of the Pulawy National Veterinary Institute in Poland for the “Poland EM Forum 2010.” The subtitle of the Forum was: “EM Technology in the Food Chain.”

The Pulawy National Veterinary Institute, part of the EU’s major policy initiatives, is one of the leading veterinary institutes in Europe. The institute has over 50 graduate students in doctoral programs, and conducts internationally advanced veterinary research. At the institute researchers have conducted overall research into the applications of EM in animal husbandry, showing how it solves environmental problems, promotes organic agriculture, prevents illness in livestock, and maximizes the efficiency of livestock feed, and they have concluded that “EM is extremely effective in making the environment and food safer in the food chain process.”

Because of this, Poland is the first EU country in which EM has received official government approval, and in this sense this year’s Forum was a very meaningful international forum.

Seven years ago we held an international EM forum in cooperation with the Warsaw Agriculture University, but at the time EM was only beginning to be used in Poland. Therefore there were few presentations from Poland, the majority being case studies from advanced countries such as Germany, Holland, Austria, Spain, Switzerland, and elsewhere, the forum being seen as support for Poland, which had such rich potential.

The majority of presentations this time, however, were from Poland, and were of very high quality, especially in the area of animal husbandry, where Poland is a leader not only in Europe but the whole world. One presentation of particular note involved the National Veterinary Institute and Greenland Technologia EM and was titled “The Unlimited Potential of EM Probiotics.” This research showed already practical uses of EM in which there was a 20% increase in revenue, and clearly proved the potential to eliminate the use of antibiotics and other livestock drugs. Another presentation at the same time, entitled “The Role of EM in Bacterial Disease Prevention in Poultry” clearly indicated, too, the potential for drug-free poultry farming.

These achievements backed up animal husbandry-related presentations made at the Forum by people from Germany, Holland, Switzerland, and Belgium, and reveal how in the period of seven years Poland has become a leader in Europe in the dissemination of EM. Summing up these achievements, Prof. Tadeusz Wijaszka, Director of the National Veterinary Institute, gave a speech entitled “Effective EM Probiotics as Part of Quality Guarantee and Safety in the Food Chain.” This speech will convince anyone in involved in animal husbandry, and pointed the way for future developments in the field. All the participants found his remarks quite moving.

In short, in animal husbandry, if EM is used in all fields as a probiotic (a biologically-based health drink) and in sanitation technology, most livestock drugs are unnecessary. This not only has economical benefits, but significantly contributes to the health of both livestock and humans. At the same time it brings about a marked increase in the quality of meat, milk, and eggs, and prevents pollution caused by bacteria and chemicals, so EM is the linchpin for solving the major issues involved in “quality guarantee in the food chain.”

All the environmental issues brought on by animal husbandry, Prof. Wijaszka said, including foul odors, can be resolved, and beyond that the animal’s waste matter can be an outstanding organic fertilizer. Not only is this fertilizer drug-free and suitable for organic farming, but it will markedly increase the output and quality of crops. This has the power to make a more reliable “quality in the food chain” for all agricultural products. Further, if EM Technology is employed in the manufacturing process as well, an even higher level of “quality guarantee in the food chain” can be achieved.

Applying EM in “Quality Guarantee in the Food Chain”

For many years I have been advocating the same thing, but in Poland the use of EM in “quality guarantee in the food chain” has been government policy and there has been steady progress. In my general overview at the Forum I stated the following: “Poland is the only country in the EU in which EM is recognized by the government for use in animal husbandry. This would be nearly impossible in other countries because of legal restraints, so most use of EM in animal husbandry there is done at the discretion of individual farmers, and it might be quite some time before EM becomes part of government policy. In short, Poland has a system for using EM that is far ahead of anywhere else—not just Europe but the whole world—and if research here continues apace, it is possible for Poland to become a world leader in livestock research, a livestock and organic agriculture kingdom.”

Seven years ago Poland was making the transition from socialism to being part of the EU and gave the impression of being a poor country; now, though, its economy is much more revitalized and developing in striking ways. Poland possesses extensive agricultural land and is situated at the pivot between Western and Eastern Europe. Based on these geopolitical conditions, if it accelerates these activities, I anticipate that, because of its past as a socialist country, it may develop a unique model for a future society that differs from the existing capitalist model.

We also heard a report about crop cultivation, which showed how the use of EM increases decomposition as well as increases the phosphorous and mineral content in the soil. At the same time that it promotes the activities of phototrophic bacteria in the soil, it also dissolves phosphoric acid, and makes insoluble minerals soluble. We were able to confirm this some fifteen years ago at Wageningen Agricultural University in Holland. It is a phenomenon that cannot be understood using conventional soil and plant nutrition science, but in the EM world it is common knowledge.

We also heard a report from Croatia concerning a movement to preserve the beautiful Adriatic Sea by using EM in sewage and water treatment plants so they could be purification sources.  The scale and the number of places in which EM is being used are extensive, and they have had notable achievements. This can be applied immediately in regions where sewage facilities are inadequate, and I hope it will spread to Italy and many other countries.

There was also a presentation from Slovenia on “The Therapeutic Effects of Cosmetics Containing EM.” This was the first ever report at an EM Forum on cosmetics, but through stringent selection of ingredients they have learned much many things about how to increase the effectiveness of EM. Soccer players from the Slovenia national team are also using these products, and though the team put up a good fight at the World Cup this time, unfortunately they didn’t make it to the elimination round.

Starting three weeks before the Forum there were torrential rains, with some regions experiencing more flooding than they’d seen in a hundred years. In the areas flooded the most some 4,000-5,000 hectares were under water, and from our airplane I could see extensive areas where houses were submerged up to their roofs.

Near Greenland Technologia EM, which manufactures the EM used in Poland, there was also extensive flood damage with over 1,000 hectares underwater, and they aggressively used EM as part of the sanitation measures involved in the cleanup. Because the scale of damage was so large, I proposed that in the name of the Forum, EMRO (EM Technology Research Organization) establish a fund in the amount of 30,000 Euros, that the participants help solicit funds, and that EM activities be used to help in the damaged areas. The activities of this fund have proceeded smoothly and we have received many thank you emails. 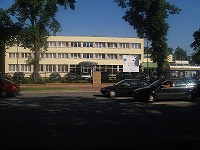 The National Veterinary Institute, site of the Forum 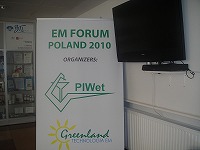 Standing signboard outside the Forum 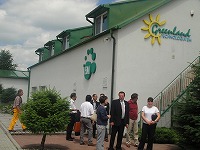 Eight days after the flooding

Eight days after the flooding

Hearing more at the site of the flooding

An area where water has receded