#52 The Mystery of Interim Safety Values for Radioactive Material

At the end of August, when the early crop of rice was harvested in the northern part of Tochigi Prefecture, it was measured at 52 Bq, so the media reported that it was safe since it was only one-tenth of the value set by the government. Before anyone was aware of it, the interim safety value set by the government as an emergency response measure has become the generally accepted standard value.

The government and Fukushima Prefecture have been promoting agricultural products from Fukushima that are below the interim safety value as if they were completely safe, but at this level it is difficult to prevent financial damage caused by harmful rumors.

International thinking on preventing radiation is based on the premise that you cannot declare that radiation below a certain amount is safe; one should aim for the lowest level that is reasonably feasible. The standards now set by our country for levels of radioactive cesium are: below 200 Bq for potable water, milk, and other liquids, 500 Bq for vegetables, rice, fruit, eggs and meat, 300 Bq for cattle feed, 5,000 Bq for the soil in rice paddies, 400 Bq for organic fertilizer, and 50 Bq for beaches where people swim.

Even for a non-specialist it is obvious that something is strange about these numbers. The accepted level for potable water and milk we consume daily is 200 Bq, while for non-potable water such as seawater it is one-fourth of that, 50 Bq. You would normally expect this to be the reverse. Likewise, the feed that cattle eat has to be below 300 Bq but the vegetables, rice, fruit, meat and eggs human consume are alright if they're below 500 Bq. Is it a question of cattle being more valuable than humans? Or that humans are able to get rid of radioactive material better than cattle? There is no basis for these numbers, which were set simply because of a feeling that cattle eat a lot of feed.

Before we realized it, these baseless provisional values have become the safety standards, and the mass media is no longer reporting that if food is below 499 Bq, and water and milk below 199, there's nothing wrong with it, and people throughout Japan are consuming radiated food thinking it's safe to do so.

What's even stranger is that the safe value for soil in paddies where rice is grown is 5,000 Bq, while the level for organic fertilizers such as compost and humus is 400 Bq. They are strictly limiting the amount of compost that can be used, even though at most a few tons would be used per 10a, while claiming that, except for areas where the rice paddies exceed 5,000 Bq, everything is perfectly fine. It's worse than some satiric cartoon.

Then what levels are indeed safe? These would be below detectible levels, or at least below the maximum safe level set through the long experience of the Ukraine and Belarus, which were part of the areas effected by the Chernobyl nuclear disaster. In both countries the safe level set for food and potable liquids is below 50 Bq.

The rule of thumb based on Chernobyl is that things are not completely safe just because they may be below 50 Bq. What's important is that they are below 50 Bq and as low as it is possible to get. Now, twenty years after the accident, the majority of dairy and other agricultural products in the area are finally below 50 Bq. I have written many times about the use of EMX  to combat internal radiation among children in Belarus; the agricultural products (including milk) that these children have been consuming daily have been at the level of 50 Bq.

In other words, even though the children in Belarus are consuming agricultural products that are one-tenth the level considered safe in Japan, there are cases where their internal radiation levels of Cesium 137 exceed 30 Bq, and in many cases have exceeded 170 Bq. There is one case in Minsk, the capital, which is considered a safe area, where levels in a middle school student exceeded 250 Bq.

As I have stated before, when the internal level of Cesium 137 exceeds 15 Bq the immune system is compromised, at 20-30 Bq the white blood cell count decreases, and at 80-100 there is epidemiological evidence that one gets immune deficiency syndrome caused by radiation. Considering all this, one cannot claim that rice at 52 Bq is safe.

The only fundamental countermeasure in this case is thorough use of EM to the point where radioactive elements are no longer detectable. Contaminated soil that exceeds 6,000 Bq has, through use of EM, reached undetectable levels. In measurements taken at over thirty places treated with EM, readings have been below detectable limits or completely undetectable.

The general guideline is to use 50-100 liters of Activated EM1 for every 10a, but in the beginning use twice that amount. Once measurements show no detectable levels of radiation, then it is enough to follow the 50-100 liter guideline. When the contamination levels are particularly high, add 10-20% EM3 (phototrophic bacteria). If people are going to use EM, I would like them to do a really thorough job of it, so they can produce an optimal crop of safe, high quality rice.

In order to do this, it is recommended that one purchase a device like the Hyakubairiki machine, considering it a part of one's farm equipment, in order to produce large amounts of EM and manage your fields so that throughout the whole year rice paddies and fields are saturated with EM. The whole system including the tank costs less than 1,000,000, which makes it cheap as far as farming equipment goes. The result is that you won't have to use any herbicides in your rice paddy, and will be able to do without agrochemicals for the majority of your crops.

At issue here is the responsibility of Tokyo Electric Power Company for the nuclear accident that occurred. The government has set a line of 5,000 Bq for rice paddies, and for agricultural products so that if the amount of radiation exceeds 500 Bq per kilogram the product will be gotten rid of. This standard has begun to be the level for compensation. In other words, on land that is below 5,000 Bq that produces agriculture products that exceed 500 Bq, the government will take responsibility for compensating the farmers. Anything outside of this is considered safe and each individual is left to deal with it. It's as if Tokyo Electric is getting a free pass.

As I have already stated, the safety values set by the government are unheard of in the world, and are, one could say, absurdly high. Those who caused this accident have the duty to restore things to the way they were. Therefore Tokyo Electric has the responsibility to clean up all of Japan to the point where there is no detectable radiation. Even in places where there is only a little radioactive contamination, we should not forget this and must continue to demand that Tokyo Electric restore the status quo. They have a duty to respond, and this is not an unreasonable demand. As I have stated before, using EM as freely as the air and water will solve these problems, the cost is low, and it is something that can be actually implemented. 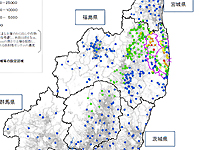 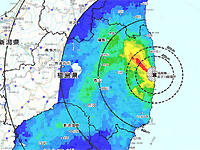 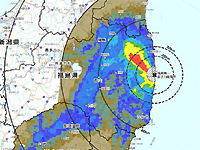 Precipitation in Soils (Cesium-134 and Cesium-137) 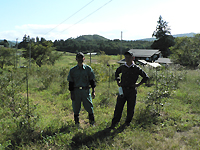