The degree of soil contamination is a reflection of the microflora

In #134 of this series, entitled “Toward the realization of true 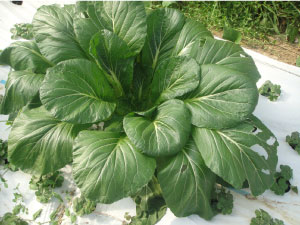 Nature Farming”, I introduced the assertions made by Mokichi Okada, the founder of Nature Farming. These can be summarized as follows: “If the soil is respected, the soil is pure (cleaned), and when its purification power is enhanced, the soil becomes a lump of fertilizer and becomes a skilled worker that grows crops”. The biggest cause of a reduction in the purification power of soil is human waste, which is used as a fertilizer source in traditional farming methods, livestock manure, and various organic fertilizers that give off odors.

These disrespect and contaminate the soil and cause multiple diseases and pests.

That is exactly right, but the fertilizer effect of fully 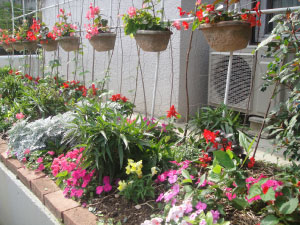 maturedorganic matter is astonishing. When the organic matter is matured it becomes like the leafy soil in mountain forests, exerts an all-round power, and the fully maturedhuman waste with no odor becomes the best liquid fertilizer.
Photo 1 Komatsuna after the seawater utilization test.
(Does not cause fertilizer shortage)
Photo 2 Flower bed in its second year without fertilizer
(Using only activated EM solution with seawater)

Following Okada’s theory, in this situation the purification is complete, and is in accord with the principle of the revitalization of nature, but the amount obtained is 1/10 to 1/50 of the original organic matter. In the 1970s and 1980s, with the rapid increase in use of chemical fertilizers and pesticides, as their defects became apparent there was a renewed understanding of the importance of organic matter. In addition, with the emergence of large-scale livestock raising, a large amount of livestock waste was considered to be a problem, and trials for utilization were conducted at agricultural experiment stations nationwide.

Therefore, currently used compost is harmless and is said to have a fertilizer effect, but there is great variety. You can judge this by putting organic materials in a pot and soaking seeds of early-emergent radish and Komatsuna and sufficiently watering them.

If it does not germinate (or in the worst case scenario, even if it germinates but dies), it is natural to plant again 15 to 20 days after application. If it sprouts and grows soundly, then it passes.

Most of the commercially available organic fertilizers will fail this test, but the compost fully fermented and matured with EM, such as Iwate Compost, has reached an ideal level.

Taking this background to extremes, it means that if organic matter is dominated by EM, raw organic matter may be applied as is. In this case as well, there is a risk that it will be reversed by harmful microbes if you plow it into the soil, so it is necessary to always manage it by spreading it on the surface and applying EM constantly to revitalize the microflora.

This method is also effective for no-till farming, weed control, pest control, and all naturally occurring organic matter can be converted so that it has revitalizing power.

However, veteran farmers of conventional agriculture are stuck in the trap of old farming methods, and they think that it is fine if they incorporate cow manure with bark compost etc. and then apply EM. There is no particular problem if the organic matter to be applied is at the level found in Iwate Compost, but as I introduced in issue #132, “Eating dirt (soil)”, general cow manure with bark compost etc. will definitely contaminate the soil. To be on the safe side, I will revisit this topiclater, but we must not fail to improve the microflora by using EM.

One example is of A Farm (not their real name),which wanted to quickly bring out the good effects of EM and, following their own ideas in various ways, failed. Each time I visit A Farm to straighten out these issues, the results of Hado measurements show how the owner had let down his guard. (see Table 1). There was an extreme difference in the cultivation area treated as shown in Figure 1. In other words, he thought that the result would be better because he used EM treated compost, but the numerical value of the products’ Hado shows that his idea was wrong. Soils that are dominated by harmful microorganisms are also the worst cases, which agrees with Mokichi Okada’s teaching, “Do not dishonor the soil, do not contaminate the soil.”

In this way, the old farming traps are so serious that even experts who have been involved in EM for a long time may fail.

[Postscript]
On January 25th, Dr. Higa was awarded an Honorary 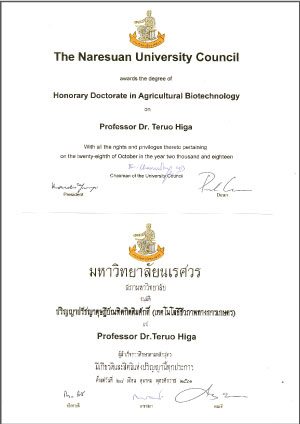 Doctorate in Agricultural Biotechnology from Naresuan University, Thailand. On this occasion, the EM project at the university was launched to widely promote the integration of EM into the society of central and northern Thailand. 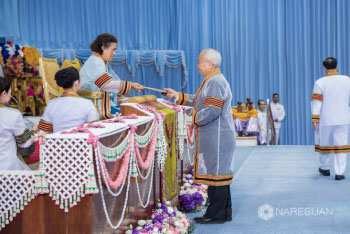