#130 Reaffirming EM technology to realize the essence of agriculture

Reaffirming EM technology to realize the essence of agriculture 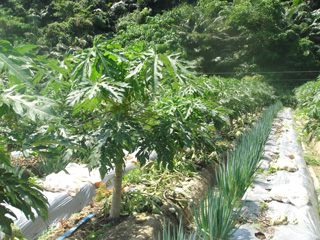 a broad sense, agriculture, forestry and fisheries, that is primary industry in general.
The essence of agriculture can be said to be the ability to correctly respond to human desires through various laws occurring in the process of materializing energy existing in the environment, mainly solar energy, and all of it depends on application of natural power and is also the key to graviton farming.
The first desire is to be “economically comfortable and prosperous through agriculture;” secondly, it is to “protect the health of producers through agriculture and the health of consumers who utilize the products, and provide various benefits.” Furthermore, it will result in a desire to “enrich the ecosystem, actively protect biodiversity, and try to achieve an essential (cyclical) solution to global warming and environmental problems as well as human food problems and energy problems.”

When this becomes a reality, agriculture will be the most valuable work in the world, a highly respected, chosen occupation, and agriculture will be the “cornerstone of the country.” However, the reality of agriculture at present is quite unnatural. We extinguish huge forests, use large amounts of energy in large machines, drain large volumes of topsoil, and decay soil with chemical fertilizer to expand desertification on a global scale. Furthermore, we lawfully spray a large amount of poison to accelerate the destruction and pollution of the environment, and as a result, we reach an inevitable self-contradiction, driving ecosystems and biodiversity into a tragic situation.

In order to overcome this dilemma, various genetic engineering research is underway. However, this will expand these self-contradictions even further, accelerating the devastation of agricultural land and genetic contamination. This series of movements has become a structural one, which combines food problems due to population growth and the bad aspects of capitalism, and it is now becoming the primary cause of the destruction of humanity.

The current lifestyle of population growth, increased dynamism of economic activity, and being surrounded by chemical substances and electromagnetic waves is directly linked to global warming, acidification of the ocean and destruction of ecosystems of the hydrosphere and of biodiversity, and the future of the human race is looking quite grim indeed. These are structural issues, so we have to solve theses issues using a new mechanism that will not create self-contradictions. In other words, there is no option other than technological innovation that has a “good circulation” mechanism in accord with the rules of nature.

On the other hand, in the science and engineering fields, in addition to the utilization of natural energy, fuel cells, power semiconductors, light emitting diodes, etc., technological innovations such as catalytic chemistry, powder engineering, superconductivity, etc. are progressing at a considerable level, and have reached the level where they should be able to respond to a crisis situation. Although it is disappointing, the “structural vicious cycle” in agriculture has not changed since the dawn of history, and has accelerated with population increase; no technical innovation has been accomplished, which has begun to leave agriculture stranded.

The only way for a breakthrough in research is by embracing EM graviton agriculture, whose future direction and goals were shown at the 2nd EM Producer Networking Meeting introduced in the previous article in issue #129.

Reaffirming the foundation of natural power


It goes without saying that th 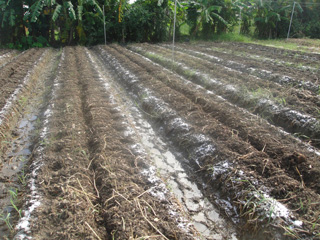 e foundation of natural power is the microbiome (microflora). Historically, the utilization of iron implements in agriculture was a revolutionary technological innovation, and at first glance the use of various agricultural machinery and facilities, chemical fertilizers, pesticides, and genetic modification etc. today seems to be innovative, but from a more pessimistic viewpoint one could say it is simply substituting machinery for human power and livestock power, replacing compost with chemical fertilizers, and using pesticides for pest control. As I already mentioned, genetic modification has become the worst option to accelerate and expand the self-contradictions in agriculture.

Since the dawn of history, we have ignored the area of natural power and instead have followed a set pattern of agriculture as tilling fields, fertilizing, weeding and controlling pests, so we have ended up lost, simply amplifying the inherent self-contradictions and the vicious cycle.

On the other hand, when strengthening the natural power of fields, microbiomes are formed that are mainly composed of useful microorganisms with a high synthesizing capacity, such as nitrogen-fixing bacteria and phosphorus-dissolving bacteria, and the soil becomes soft and porous, the topsoil does not flow away, earthworms, etc. will increase and plowing becomes unnecessary. Furthermore, it is obvious that pests will not appear at all, continuous cultivation will be possible, and weed countermeasures will be easy as well. However, because this is insufficiently organized systematically, things remain at a standstill.

As I mentioned in detail in the book Agricultural utilization and environmental conservation of microorganisms (published by Nobunkyo in 1991, now in digital format), the effective microorganisms here are EM.

Over the following thirty years, the evolution of the metagenome analysis method has made it clear that not only human health but also the soundness of nature itself is determined by the level of the microbiome, the importance of which has become increasingly emphasized.

We conclude that if there are many kinds of good bacteria and their density is high, everything will become healthy. However, at the present time, it is no exaggeration to say, based on evidence, that there is no practical technology other than EM that can, safely and inexpensively, induce in all situations a desirable microbiome.

In addition, the activated EM solution cultured with seawater is less prone to degenerate, a subculture is also possible if the stock solution is added at a ratio of 1:1,000 and the central microflora is maintained, and the cost associated with EM is negligible. 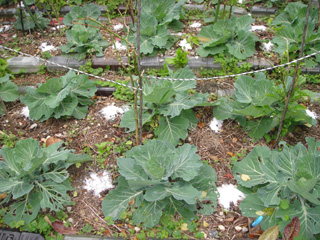 activated EM solution to the soil, effective microorganisms (good bacteria) originally present in the soil are also activated, putrefying microorganism (bad bacteria) are greatly reduced, and the types and numbers of microorganisms will increase significantly in all soil layers.

3.    Therefore, the plowed layer will become deeper year by year, water permeability will improve, there will be no runoff of the topsoil, and the soil will become fertile and easy to cultivate with no tillage. At the same time groundwater will become abundant.

4.    In addition to a remarkable reduction of radioactive material and absorption suppression effects, harmful heavy metals (cadmium, mercury, arsenic, lead etc.) in the soils are completely inactivated and are not absorbed by plants. Also, EM will completely decompose harmful chemical substances including residual agrichemicals and fats and oils, and dioxin, or render them harmless.

5.    EM is widely applied in animal husbandry and fisheries, and breeding and farming that do not require any antibiotics is already in practical application on a large scale. Antibiotic contamination is now becoming a serious health problem.

6.    It is possible to completely inactivate viruses in the air in five to ten seconds when you dilute activated EM solution to around 1:100 ~ 1:500 and spray it. This application is spreading as a practical technology that is an effective measure against influenza, foot-and-mouth disease, and avian influenza.

7.    It is possible to convert organic matter including livestock manure, human waste, food processing waste and forestry waste, into organic fertilizer in a few days or a few weeks. In addition, by spreading these materials on the soil surface and spraying EM, it can be composted on the surface of farmlands for a very short time (1-2 weeks), with a remarkable improvement of the microbiome.

8.    Any pests can be thoroughly suppressed by continuous spraying of a 1:20 solution of high-quality activated EM stock solution. Also, when making activated EM solution, adding iron rust at a ratio of about 1:1,000 makes it possible to change it to black rust (divalent iron), making for even more effective results.

9.    EM cultivated in seawater can be utilized as a herbicide, and at the same time it not only serves as a source of minerals but also has a more powerful pest control effect when it is diluted to about 1:20 times and sprayed over foliage; using iron rust together with it will make pesticides completely unnecessary. Also, when applied to soil, the microbiome will also increase to heretofore unseen levels, so the natural circulation of organic matter will be sufficient and fertilizer will be hardly necessary at all, and it will be highly resistant to  damage from weather disasters.

11.    Improvement of forest and aquatic microbiomes by EM not only significantly enhances phototrophic capacity but also enriches ecosystems and biodiversity. When considering global warming countermeasures, low-dose radioactive contamination spreading around the world, and pollution control of chemical substances, EM should be used as freely as the air or water in every situation. With this as a basis, by utilizing salt, charcoal and barrier technology it is possible for further limit breakthroughs to be achieved, giving us a glimpse into the future of the EM graviton farming method.

EM technology now includes not only 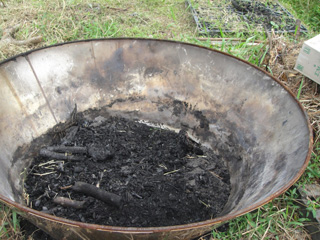 the primary industry, but also various pollution control measures and countermeasures against radioactive contamination in Fukushima, as well as use in civil engineering construction, lakes and rivers, purification of ocean, measures against electromagnetic waves, energy saving technology (application of rectification), and the medical field, and it has been used to improve the functionality of materials, and so on.

From a common sense point of view, it is a matter of concern when you keep using something for a long time, but no matter how good it is, problems still always occur.
EM, however, has been put into practical use for about 38 years, and no such inconvenient truth has occurred in any large-scale spraying or long-term use, with favorable, cyclical, sustainable conditions continuing. In other words, we should recognize that, rather than allowing entropy to increase, EM reduces entropy, and actually strengthens the level of syntropy (resuscitation).

Given that damage to human health and destruction of the global environment are all caused by the level of contamination sources (increases in entropy), in order to further enhance healthy, balanced eating and farming that will prevent and cure disease, there is but one choice: to devote ourselves to the utilization of EM technology.

I plan to describe this in more detail next time, but suffice it to say here that agricultural products obtained by the EM graviton farming method far exceed conventional products. As a reference, I introduce the Hado (wave energy) measurement results sent from Mr. Nomoto in Matsuyama City, Ehime Prefecture. 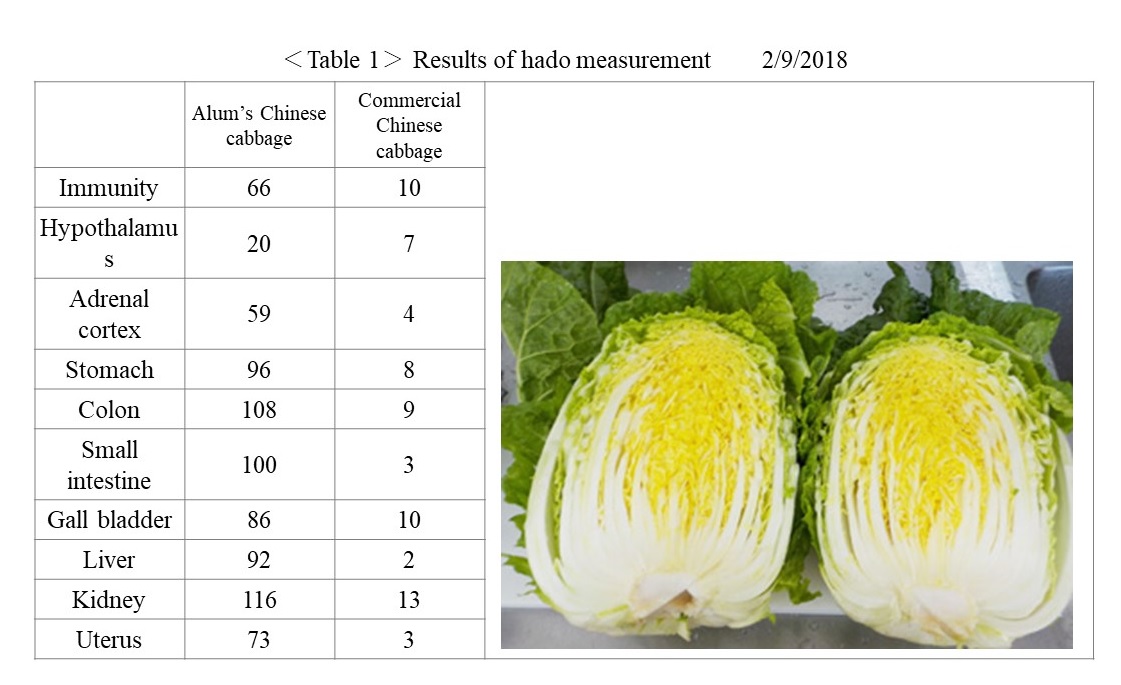 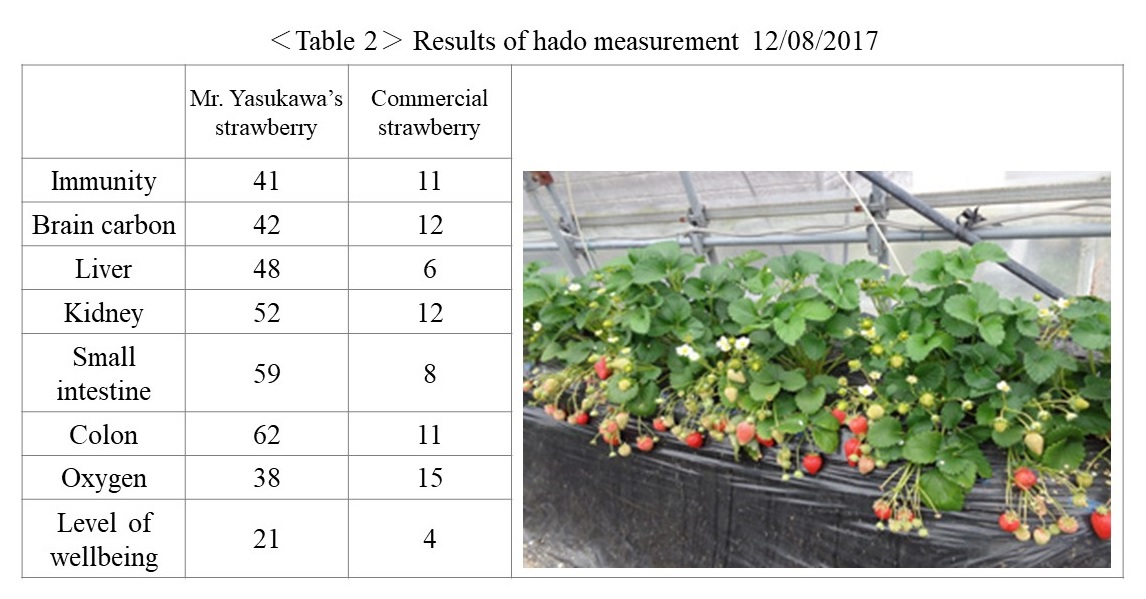 21 is the numerical value considered perfect, and agricultural products exceeding that number have only been achieved when utilizing EM. It is generally thought that it is impossible for products of ordinary organic agriculture to exceed 19 to 20.
Although the results in Table 1 and Table 2 are absolutely impossible by conventional means, the immunity value of the products of Sunshine Farm of EM Research Organization and my own experimental garden (Blue Sky Palace) are infinite. What we see here is a reality whereby food and agriculture produce a safe, balanced diet that prevents and cures sickness.