In Japan there have been many natural disasters recently due to catastrophic weather: terrible torrential rains, drought, and record heat. It is believed that global warming and continuing evaporation of moisture from the oceans and land has caused all sorts of fluctuations in the weather.

Over twenty years ago, at a lecture in Nagoya, I was asked whether global warming would cause land to sink, and I responded thus: “As temperatures rise, the water on the whole Earth will evaporate more, and though the sort of phenomenon you describe won't take place, instead what will happen is torrential rain all over the world. Increased cloud cover will mean lower temperatures, but depending on the turn of events this could bring on both heat waves and extremely cold temperatures, and numerous natural disasters.”

If we view the situation in units of thousands of years, the unusual weather, earthquakes, and other natural disasters occurring now all follow the law of cause and effect, but certainly population increase, economic warfare, and overconsumption brought on by the principle of competition have promoted these changes.

Over fifty percent of our natural greenery has already been lost, and the Earth has become prone to an increased number of raging storms; this has also been spurred on by excessive energy consumption, environmental pollution caused by chemicals, and the destruction of the ecology and biodiversity. These are structural problems, none of which can be solved through an extension of existing technologies.

EM has been used in many areas in dealing with the floods and crop damage resulting from the torrential rains in the second half of the rainy season, and has played a productive role. However we still remain at the level where people view EM merely as a useful extra tool.

There is no need for me to restate that the fundamental use of EM involves strengthening and sustaining the phenomenon of syntropy (revitalization), but in a broad sense the many natural disasters occurring now can be seen as an increase in the entropy existing in the natural world. Very simply put, EM can lower the world’s entropy and strengthen syntropy, and transform nature from an unstable, fragile state to a more stable state.

I understand how people have criticized me and will continue to do so, saying that Dr. Higa has turned into some religious figure spreading ridiculous claims about EM being omnipotent, but I continue to insist that if the whole world adopts an EM lifestyle in which EM is used as freely as the air and water, and EM is incorporated into all manufacturing activity, the kind of present day natural disasters we have experienced can be minimized and almost all the problems facing mankind can be resolved.

The miracle in Tokyo Bay that I discussed in last month’s essay is discussed in more detail in the online journal DND (no. 73), but I don’t believe that the water in the sea getting cleaner is the only result. I have a feeling that the number of marine and water-related accidents has also decreased quite a lot, something we need to verify.

In the digital age (when everything is expressed in numerical values), the senses are viewed as unscientific and primitive. This is certainly true in the case of work that follows certain rules, but if the prerequisite is creating a healthy, happy life, that depends on the power of the senses to fill in the gaps left by the digital.

There is a plethora of painful examples in the world today in which logic has been over emphasized to our detriment. For example, when healthcare treatment is based almost blindly on medical data, often patients’ condition worsens and they even die an early death; when things are carried out strictly according to logic, failures often result; and when there was an over-reliance on economic numbers, blue-chip companies go bankrupt.

These farcical results come from an over emphasis on the digital and an ignoring of the analog. All types of training begin from different, individual standpoints, and as long as these are correct, this will ultimately lead to creativity, with developments that cannot be imagined by the digital.

The first point is the importance of the authentic.
Natural principles allow only the authentic to remain. These principles create no inconsistencies, and further have the power to evolve solutions to any inconsistencies. Simply put, there is only good, and nothing bad, and the longer you continue, the better things become. In other words, something can be called the authentic if it has the qualities and structure of a virtuous circle.

If we examine modern scientific technology and the social structure with this in mind, we find that the authentic is actually the exception. The reason lies in the fact that all structures at present are based on competitive principles where money and power are the prime indexes.

Incomplete technology is used without a thought to its consequences, as long as it is profitable. This trend has led to nuclear power, the production of most chemically-processed food, gene recombination, most advanced medical treatment, damage caused by electromagnetic waves in industrial communications, drugs, agrochemicals, and so on. The list is endless, and most of these have been incorporated into the social structure and are viewed as necessary evils. But we should never forget that a necessary evil is still, at heart, evil.

The third point is an enhanced sense of how one can contribute to society.
In modern society, which is full of self-contradictions, it is not easy to become this kind of person. You will become more conscious of the gap between one’s conscience and society’s values and structural contradictions, and will have to grapple with these double standards.

As I have often discussed, it is no exaggeration to say that adopting an EM lifestyle and mastering the power of EM will allow one to achieve the above three goals. Still, as long as one continues to consider EM as simply a convenient product, it will not help one in the kind of awareness training I have described.

Methods to Increase Awareness of the Phenomenon of EM Syntropy

The fundamentals here involve having a clear awareness of the revitalizing power of EM—its antioxidant properties, in anti-ionization properties, and the catalytic power it has to convert harmful energy to useful energy—and to cultivate throughout one’s life the enjoyment that can be found in the results. The starting point involves thinking that when something good happens, when one is protected from danger, when the worst situation actually becomes a force that creates the best possible outcome, it is all due to EM. In other words, one must believe that EM is almighty.

1. If you wear EM products and are in a traffic accident you won't be injured badly.
2. If you live an EM lifestyle and there is a large-scale earthquake, not even a single cup in one’s house will fall over.
3. If you live an EM lifestyle, the amount of electromagnetic damage will decrease, your electric bill will go down, and electric appliances will function better and last longer.
4. EM-treated farms and golf courses have greatly reduced instances of lightning strikes.
5. Thorough EM cultivation has made for fewer natural disasters.
6. An EM lifestyle makes one become healthier, and will improve interpersonal relations.
7. Places where EM is used are safer, with fewer accidents.
8. Instances of bullying will decrease in schools, and children will get along better.
9. Animals will get along better.
10. All living beings will feel a fresh awareness of life.
11. If you live in an EM-built house and live an EM lifestyle, no one in the house will be sick.
12. Your physical condition, and mental alertness, will improve by the year.
13. Be sure to often check EM books and information.
14. No matter what happens, know that in the end it will all work out for the best.
Understand that good things are due to EM, and if something bad happens it means that one has not fully mastered EM. By applying this idea to our lives, each one of us can strengthen ourselves through the power of EM.

Revisiting the Importance of the Microbiome

As I have explained numerous times, phenomenon in the natural world are all controlled by the microbiome (the ecology of microorganisms) in the natural world. The miracle of Tokyo Bay I described last month, and people becoming ill or maintaining good health—all of these are the result of the microbiome. Naturally, with the loss of over half of the Earth’s greenery, if the destruction of the environment continues, the microbiome too will become one that oxidates and destroys. The result will be increased entropy, leading to a process whereby everything disintegrates. In other words extreme oxidation will occur; at the same time, ionization will be strengthened and reactions will take place, there will be an increase in harmful electromagnetic waves and radiation, strengthening sites of negative energy.

As the population of Earth rapidly increases past seven billion, the only choice for an alternative solution to the function that greenery used to play is to artificially transform the microbiome into one that is revitalizing. Continued use of EM will invariably change the microbiome into a revitalizing type. That is why it is absolutely necessary for humans to build an EM lifestyle that will increase the amount of EM.

Some people are of the opinion that it will be a major problem if the Earth becomes full of EM, but EM functions when humans continue to manage it; if they stop using it, it will immediately go back into minority status again. Considering this characteristic of EM, no matter how much people increase the amount of EM and continue to use it, the Earth will never become overly full of EM.

All natural disasters arise from an imbalance, an extreme deviation of energy, at the root of which is an increase in oxidation, ionization, and harmful energy. Therefore if use EM, which has the opposite characteristics, and make the whole microbiome of the Earth EM-like, we can minimize the threat of natural disasters. In a word, it depends on the level to which EM becomes a vital part of society. 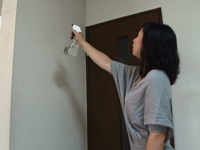 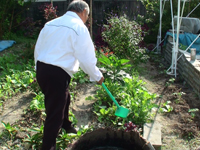 Applying EM green grass fermented liquid, which is made from weeds, onto crops. 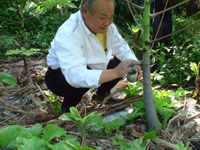