#57: Report on the Measures Taken by Kingdom of Thailand Using EM to Deal with Polluted Water

In the last edition of this website I reported on how EM is being used as part of a national policy to clean water polluted during the monumental flooding that occurred in Thailand. The results have been very dramatic and have been reported worldwide. This month Chairperson Waranut Jitthamsaphaporn of the advisory committee promoting this project sent me two reports, one entitled “Summary Report on the Emergency Project to Deal with Water Pollution Problems Caused in the Flood Affected Areas in the 14 Central Provinces” and another entitled “Summary of Results of the Project by the Royal Thai Army to Purify Water Polluted by Flood Damage.”

Since these two large-scale projects were funded by the government and implemented by government agencies, it is necessary to evaluate the ways they were implemented and the results, and make this information public. The project dealing with the flood-affected areas of the 14 central provinces was a joint project by the Ministry of Natural Resources and Environment, the Defense Ministry, and the Royal Thai Army. The entire process up to implementation is outlined in the report, from the forming of the committee, to the appropriation of the budget, to the verification of the results. The executive committee included all the governors of the affected provinces. The project dealt with polluted water and the foul odors emanating from large waste dumps (those over a few hectares in size).

Instead of measurements taken of BOD, COD, SS or other standard methodologies for measuring the levels of water purity, purity levels were determined by smell and DO (dissolved oxygen) levels. This decision was made based on the vast experience Thailand has had in the past, and the only ones to voice objections to it were a few researchers who know nothing about EM.  In general, when DO levels fall below 2.0mg/L, water becomes putrid, E. coli bacteria increase and the water gives off a foul odor. As a result, no living creatures will live in the water. Using this index, the water was checked and found to have a DO reading of 0.5mg/L and gave off a foul odor. Soon after spraying EM the foul odor of polluted water in the waste dumps quickly subsided; after seven days the DO level reached 2.0mg/L, improved even further to 4.0, and in some areas there were even examples of it reaching 6.0, the level for good water. The summary section of the report concludes that they had good results, that the budget and implementation methods allowed them to reach these goals, and that the overall project was a great success.

The report on the project by the Royal Thai Army to purify polluted water summarized how EM was distributed to citizens, and how citizens cooperated to protect themselves. The same sort of project was also conducted by the Ministry of Natural Resources and Environment and the Ministry of Social Development, but what is worth noting is how it was implemented. Naturally all the steps are outlined here, from the forming of the executive committee, the budget, and actual ways in which it was implemented, and the way this was implemented serves as a model for crisis management in times of disaster.

The army and each division created a system whereby EM could be provided, printed pamphlets that could be used as users manuals, and trained volunteers in many places. They further strengthened the system whereby the military and citizens could work in tandem, and in every region they proactively promoted purification movements that could carried out by the citizens themselves. They distributed, in each distribution center, 10,000L of EM per day, and the total amount of EM distributed to citizens at the five centers came to over 1.5 million liters. The results are summarized in the section below:

I plan to give more details on this summit later in this site, but here let me say that what was most meaningful about this summit was the way it developed ideas presented last November at the EM Forum in Okinawa. The EM Forum in Okinawa itself went even further than any other previous EM Festas and Forums in the substantial nature of its presentations, presenting concrete measures on how to use the power of EM in the areas affected by the Great East Japan Earthquake, and in radiation countermeasures in Fukushima, showing how people have incorporated EM into their daily lives, and by discussing various health issues and how EM can be used to prevent disease.

Those involved in the Summit have a sincere desire to share information about these successes to the people who are directly facing difficulties now, and the Summit was strategically held in Yamagata, which has taken in more evacuees from Fukushima than any other prefecture. Unlike at the Forum in Okinawa, presenters were allowed more time to present their findings, and the Summit included reports on the later successes of projects that had been discussed at the Okinawa Forum. For these reasons, along with fostering a deeper understanding of EM, its applications, and how it can be used as a vital part of daily life, the Summit also presented practical solutions for the disaster areas, which have a seemingly bleak future, and provides the people of the region hope for the future and the power to face the challenges before them.

I believe it is in keeping with EM’s sacred mission to hold this kind of EM Summit in areas throughout Eastern Japan. By widening the scope of our activities in this way, EM’s actual power will be understood more deeply. I am confident that EM will become, as in the case of Thailand discussed above, an accepted part of national policy in dealing with natural disasters. I look forward to the participant’s wonderful achievements and to their very significant EM activities in the future. 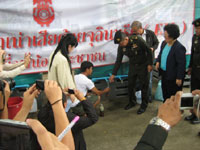 Opening ceremony to mark the beginning of free distribution of EM by the Royal Thai Army. 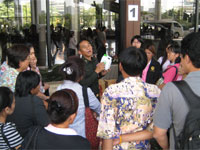 People listening to an explanation about Activated EM. 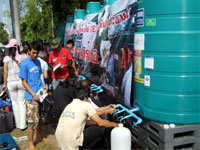 Citizens receiving EM at a military facility in Bangkok. People have come from other provinces as well. 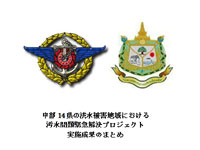 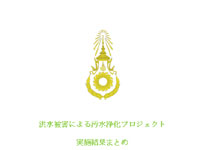 The cover of the reports. The report by the Royal Thai Army is on the bottom. Click to enlarge. They are translated into Japanese.

Presenters at the Tohoku EM Summit.