On October 27 at the Mitsukoshi Theater in the Nihonbashi Mitsukoshi Department Store in Tokyo, the main store of the chain, the Environmental Forum “Revive the Nihonbashi River!” was held to report on progress on the movement to clean up the Nihonbashi River begun in December, 2006. The Nihonbashi River, a Class A river 4.8 km in length, branches off from the Kanda River, flows between Iidabashi and Suidobashi, passes the Imperial Palace on the northeast side and flows into the Sumida River.

In the past the river played an important role, for it was used to transport goods to Edo Castle and as a flood countermeasure for the Sumida River. For a time after the war, people also enjoyed fishing and swimming in it, but at the time of the Tokyo Olympics in 1964, perpendicular dikes were built along the river, with highways constructed above these, and the river became cut off from the lives of area residents.

Naturally when there are heavy rains, dirty water flows into the river, sludge accumulates, gives off a bad smell, and no living creatures can inhabit it, and the river has essentially been abandoned because of this. The only group that has been taking care of the river is the Historical Bridges Nihonbashi Preservation Society; this society’s main activities are the scrubbing of the Nihonbashi bridge once a year, but this did not lead to the idea of cleaning the water in the river.

Until recently this scrubbing of the bridge has been done with synthetic detergents, but concern over water pollution led to changing to the use of EM™ Shabondama Soap in 2006. This was the first contact between the Society and EM™, and since then a movement has begun, based on the results shown with the Dotonbori River in Osaka, to clean the water of the Nihonbashi River using EM™. The main funding for this cleanup effort comes from a local volunteer group that is mainly involved with the Historical Bridges Nihonbashi Preservation Society; Chuo Ward and Chiyoda Wards have also cooperated in this effort, while technical advice is provided by U-net (the NPO United Networks for Earth Environment) and EM Sogo Net, and a number of other organizations have also lent their support to the effort.

Specifically, the cleanup efforts involved the construction of a plant near Horidomebashi that can produce 10 tons per week of activated EM・1®. In the past two years 1,000 tons of activated EM・1®, as well as 101,500 EM Mudballs, have been put into the river.

After the EM・1® cleanup efforts began, there was a dramatic transformation in the river. In a few months one couldn't detect any foul odors in the river, in half a year most of the sludge disappeared, and waterfleas, sludgeworms, and lobworms, which couldn't be found in the river, were soon back, as well as schools of small fish. Below are my comments at the Forum on the data collected at Nihonbashi River.

“Based on environmental criteria used by the Environmental Ministry to classify public bodies of water, Nihonbashi River was classified as C Class river, which means that the water quality can barely support carp and gibels. Because of this environment, there were no lobworms or worms, or other bottom sediment type creatures at all, and in the summer blue-green algae appeared, giving off a bad odor, and fish died and floated to the surface.

One year after introducing activated EM, however, the water quality has shown a marked improvement, with the river now classified as a B Class river, nearly reaching A Class rank.As a result of cleanup efforts, lobworms, worms, and other bottom dwellers have increased, and so have the varieties of fish. In the fall of 2007 people were able to fish for gobies, in the spring of 2008 migratory fish are running in the river, and the river has transformed into an abundant ecosystem.

One and half years after first introducing EM, the river reached A Class status, and now is on the verge of AA Class status. Based on the water purity criteria used for swimming areas, it has reached B Class, and occasionally A Class, level. There are variations in measured values caused by heavy local precipitation, but when the river is measured when there has been no rain and it is clear, it reaches AA levels.

In other words, when rain has not effected it, water quality in the Nihonbashi River has reached the Fisheries 1 Class level, in which trout and char can live in the river, and the river’s quality is such that it could be used as a water sourcein emergencies (earthquakes and major fires).”

During the Forum a number of other case studies were presented of EM being used in similar revivals. We would next like to deepen ties with local governments in the upper reaches of the Nihonbashi River, and develop the river further as a social resource for tourism and other activities. We are positive that this can develop into a new urban environmental movement that will extend to cleaning up not just the Kanda River, but the Sumida River and Tokyo Bay.


This year the annual EM Festa was held as an EM Forum. Compared to previous Festa even more advanced information was exchanged, and there was a great deal of excitement in the air. This year the EM Research Organization set up a regional development section and has been very active in promoting regional development by holding advanced EM instructor courses, and promoting EM model towns. The research and manufacturing sections of EMRO, too, have become more fruitful, and there have made much steady progress, including the establishment, on July 3rd, of a clinic to deal with chronic illnesses.

Further, at Meio University, where I am a faculty member, we will be offering a new gratis ten-unit EM course starting next year. No matter what faculty a student belongs to, he will be able to take the ten-unit EM course and have the units count as basic units towards his degree. In addition, if a student successfully completes a special program set up by the university’s EM Research Lab, he will become an official EM specialist.

Therefore, it will be possible for any students who wish to be an EM™ specialist in the future to join any department and major in any subject they wish, while taking a minor in EM™. There are no limits to the number of students in this program, so we look forward to young people taking up the challenge.

Because of various reasons, this year’s EM Medical Conference was closed to the public, and about 250 people participated. This details of the conference will be published in a full conference proceedings volume and, while this is being edited, we plan to make some of the presentations available on the Internet.

The title of this year’s EM Medical Conference was “Comprehensive Medical Care and EM Technology™,” and there were presentations on a variety of topics, including Yoga and Ayurveda. Notably we learned how the change from using EM-X to using EMX Gold has brought about more effective treatment at the clinical level, and how the use of EM-G and EM Max Powder, especially at the Shokokai Clinic (EM Clinic), has been successful in treating intractable illnesses. Inflammation caused by chronic rheumatism has disappeared, and there have been improvements not just in cases of cancer, but in Parkinson’s, ALS, and dementia. One report told how patients with retinitis pigmentosa, an untreatable pigmentary degeneration of the retina, have greatly improved, and it is clear from these reports that EM Technology™ has a clear role to play in combating chronic illness.

Another report related how when miso (soybean paste) with EM Regenerative Sea Salt in it was used in school cafeteria lunches, there was a marked improvement in disorders of the autonomic nervous system, irritability of the basal ganglia, and lack of concentration. We can look forward to a groundbreaking role that EM Regenerative Sea Salt can play in improving the functionality of manufactured food products. 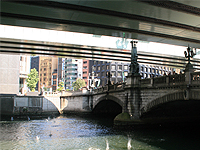 In the morning of the day of the Environmental Forum, 3,000 EM Mudballs were thrown from Nihonbashi.

Washing of the Nishonbashi bridge is a regular event that has been done 38 times in the past.

The EMTM plant in Chiyoda Ward used for cleaning up the Nihonbashi River. 10 tons of activated EM・1® are put into the river each week.

Nine members involved in the Nihonbashi River cleanup movement took the stage to participate in a discussion.

Hotel Costa Vista Okinawa, one of the meeting sites for the EM Forum. 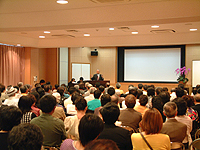 The hall was packed when Dr. Higa gave his plenary speech. 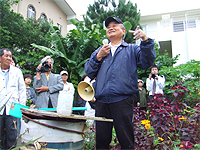