For more than ten years I have written many times in this series how EMTM can be a countermeasure against influenza. Here I would like to reiterate how EMTM can be effective against all viruses in living creatures, including Foot-and-Mouth disease, which is caused by a virus, Koi Herpes virus, White Spot virus in shrimp, and Yellow Head virus.

If EM•1® is used in livestock farming as freely as air and water, not just antibiotics, but most medicine will become unnecessary, the efficiency of feed will increase by 10-15%, and the quality of the products will greatly enhance human health.  In addition, sanitation issues will all be done away with, all public health problems caused by livestock—foul odors and water pollution—will be solved, and the urine and fecal matter of the animals can be an excellent organic fertilizer, which will greatly help organic farming.

In the EM world this is already well known, and if EMTM is put into use, it can also fully deal with the pandemic of Foot-and-Mouth disease now plaguing Miyazaki Prefecture.

Note: In the case of cows, it is effective to inject them once every ten days with 30cc of EM •X GOLD®, but each farmer must take individual responsibility for this. For pigs and calves, use from 1/3-1/2 that amount.

Note: Aim to use EMTM Bokashi for 1-3% of feed, a fairly large percentage of the feed.
Note: When things have settled down, you can reduce the amount used to 1/2-1/3.

If this is used as an opportunity to transform all animal barns to EMTM specifications, animal feed can be used without any antibiotics or disinfectants, all public health problems caused by livestock farming can be resolved, and the waste matter of the animals can be an excellent organic fertilizer, which will greatly help organic farming.
The above was my response to questions that came in to me from EM users in Miyazaki and Kagoshima.

Over Twenty Years of Achievements Applying EMTM in Livestock Farming

Unfortunately, Mizaki Prefecture has been struck by a pandemic of Foot-and-Mouth disease. At present this may be confined to within Miyazaki, but there is fear that it may spill over to other prefectures and all possible measures must be taken to prevent this. It might sound a little self-serving to say there is any silver lining in this, but at present, after the emergency was announced, I’ve received no reports of cows and pigs raised using EMTM in Miyazaki Prefecture having Foot-and-Mouth disease (As of May 26).

The main component of EM•1®, phototrophic bacteria, have various anti-viral effects. This has long been accepted by specialists. The other major constituents of EM•1®, lactic acid bacteria and yeast, have many anti-viral effects that strengthen immunity, which is also widely recognized.

What I have discussed above are things that individual farmers can undertake on their own responsibility, and do not conflict with prefectural and national policies. Of course we can expect opposing arguments to arise to what I have explained, with people saying that there is no scientific proof for the idea that EMTM is effective against Foot-and-Mouth disease and avian influenza, or that this use of EMTM is not officially recognized.

What I am trying to say is, in response to these types of problems that can't be dealt with decisively, it is vital to publically make known examples where certain approaches actually work, have each individual decide what they are able to put into practice, then thoroughly investigate the results and use these results to help formulate the next countermeasures. Naturally this process must follow policies determined by the national government, but in this case it means dealing with cases in which farmers have used EMTM and have had no outbreaks of disease whatsoever.

The method used up till now has been to slaughter all the animals in an infected area, whether or not they have contracted the disease. But as special cases involving EMTM have appeared, follow-ups should be done to help us deal with the disease the next time around, and in cases where there really has not been an onset of the disease this is an excellent opportunity to obtain practical knowledge about disease prevention. Because the majority of livestock farmers in Miyazaki Prefecture began to use EMTM, in the region where there is an outbreak of Foot-and-Mouth disease, the spread of the disease has stopped and the prefectural government is confirming cases of farms that are disease-free. I would like authorities to examine, from many different angles, the cases in which animals were slaughtered even though they hadn’t contracted the disease, without just attributing the lack of disease to mere coincidence or good luck.

Miyazaki Prefecture has had outbreaks of Foot-and-Mouth disease and avian influenza in the past, too, and compared to other prefectures it is a region in which the danger of infection is extremely high. The whole environment is highly oxidized, harmful microorganisms easily form, and because of this farmers must conduct repeated disinfection. This promotes even more oxidation, leading to the situation where the animals’ immune systems are notably weakened. There is no positive proof that the viral information that has been treated in the past has been eradicated.

This is similar to the many cases of restaurants where there have been outbreaks of food poisoning and, no matter how many times the restaurant is disinfected, and no matter that it’s been given the stamp of approval by the Board of Health, there have been more outbreaks. In order to eradicate the latent viral information, it is important to begin by increasing the density of microorganisms like Effective MicroorganismsTM that have anti-viral effects. If EM•1® is sufficiently sprayed in places where animals have been slaughtered, there will be no foul odors, there will be rapid decomposition, and unlike other methods there will be no secondary pollution. That means an anti-bacterial, anti-viral barrier is created.

The important thing is after an outbreak is over, when farmers begin raising new animals. It is necessary that they learn to spray EM•1® everywhere in animal barns, and in livestock farming use EM•1® as freely as water and the air. If this is thoroughly put into practice, livestock farming in Miyazaki Prefecture will develop to a level heretofore unseen, and greatly contribute to cleaning the environment and to organic agriculture. 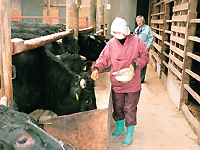 If diluted EM•1® and EMTM Bokashi are spread on the barn floor, it will stay sanitary.

The manure of cows that have drunk water and eaten feed containing EM•1® has no foul odor.

A pile of cow manure that has no foul odor.