Continuing from last year, on August 8th of this year activities related to International EM Mud Ball Day were held in Malaysia, under the auspices of the Penang State government.

Last year over 24,000 people participated, using 1,200,000 mud balls. As a result the sludge in shores where the balls were thrown in has disappeared, mangroves have quickly grown up, and shellfish, shrimp and crabs have returned. Seeing these excellent results, the Penang government decided not to just have a once-a-year event with many people mobilized at one time, but to get the cooperation of businesses and volunteers from local governments, instructing them on how to apply EM mud balls and Activated EM on a regular basis to clean up rivers and seas.

Therefore, even though this year’s event was only half the scale of last year’s, with 500,000 mud balls thrown in five spots, it should be noted that many more educators were involved this time.

The eighth of August (the eighth month) is considered an especially auspicious day in both Japan and China since the character to write “eight” spreads out wide at the bottom, symbolizing good fortune. It should also be noted that people from 14 different countries, including APNAN representatives, participated.

This movement has spread to other states in Malaysia, and it has begun there, too, to be more than just a simple event, but a regular method for cleaning up the rivers and seas and making them more abundant.

In our country, too, continuing from last year, as part of the events to celebrate “Ocean Day” (a national event on the third Monday of July to give thanks for the life-giving power of the oceans), people all over Japan threw EM mud balls and Activated EM into bodies of water. As has already been introduced in detail in this online magazine, through the efforts of 35 prefectural governments, 340 local organizations, and 11,758 people, 444,460 EM mud balls and 294,221 liters of Activated EM were put into bodies of water at this time. As a symbol of the activities of EM users throughout Japan, we hope it will continue to be an enjoyable, enriching event.

Continuing with the EM Medical Health Seminar “Case Study Reports 2009” held in Okinawa last year, this August 22, at the Seiryo Kaikan conference center in Nagata-cho in Tokyo, we held the second such seminar, “Case Study Reports 2010,” with some 300 people participating. The causes of illnesses can be roughly classified into several major groups: those caused by an imbalance in the immune system, nervous system, and metabolic system resulting from the accumulation of stress; those resulting from mutations in DNA caused by chemicals, viruses, radioactivity, etc.; and infectious diseases caused by microbes and protozoans. Usually, several causes act together.

Research to date reveals that living an EM lifestyle will strengthen the immune system, render chemicals, radioactivity and electromagnetic waves harmless, and get rid of heavy metals and chemicals (for instance, dioxin) from the body. It also has remarkable effects not just on AIDS, but on other intractable diseases such as viral hepatitis and adult T-cell leukemia and other diseases caused viruses. These case studies have been reported at the EM International Medical Conferences.

For the last 29 years I have been asserting that if one lives a complete EM lifestyle, increasing the amount of EM and using EM as freely as the air and water, then one can have a life free of disease. This has become common knowledge to those who have put the EM lifestyle into effect, and has begun to be acknowledged by citizens throughout our country.

In 2009 healthcare costs in Japan exceeded 35 trillion yen. Since actual tax revenue is 37 trillion yen, our country has reached a crisis state. Certainly, healthcare costs will increase as the number of elderly increase, but the majority of elderly people I know who live an EM lifestyle never get sick. The high costs of treating intractable diseases have also greatly contributed to the rise in healthcare costs, but present day medical treatment and medical science are essentially helpless in the face of these diseases.

With this as background, we presented case study reports of actual EM users to help disseminate the EM lifestyle and to let as many people as possible know about the measures EM medicine can take against intractable diseases. I have detailed cases study reports from 2009 in this column (nos. 25-27), with reports on how the use of EM has brought about excellent results, impossible with conventional medical treatment, in the treatment of retinitis pigmentosa, rheumatoid arthritis, Parkinson’s Disease, and polycystic kidney disease.

After this, at informational-exchange meetings with physicians, we have also had reports of the excellent of effects of EM on ALS, multiple sclerosis, cervical cancer and dementia.

This year we had reports from six people on diseases not reported on in earlier meetings.

1. Mr. I (62) from Tokyo, was diagnosed with advanced stomach cancer (Stage IV), which had spread to his lymph glands and was inoperable, and he was told in May of 2008 that he had a year to live. As he reported, under the direction of Dr. Shigeru Tanaka he began living the EM lifestyle; at the same time he began autonomic nervous system immunotherapy, made improvements to his lifestyle and diet, and took ceramic and stone spa baths. Eight months after the diagnosis, his blood test data had returned to normal levels, and last year, various examinations at Asaka Kosei Hospital--CT scans, ultrasound, and endoscopy—all revealed no abnormalities.

In Dr. Tanaka’s view, there are many cases in which the EM lifestyle does away with cancer, shrinks tumors, and prevents its spread, but to completely cure it, it is critical to fundamentally change ones life habits so these effects can be fully displayed, and live a life that follows Nature’s principles and that is beneficial to the body. What Mr. Ishii has done is a model of this, and people who follow this can conquer cancer and other diseases on their own, without the need for physician.

2. Ms. K (77), told she had terminal liver cancer and 3-6 months left to live in March, 2006, passed away last March, and an autopsy showed that her cancer had not spread. Ms. K’s daughter gave the report in her stead. After she was told that she had only months to live, she began an EM lifestyle in October, 2006 under Dr. Shigeru Tanaka’s guidance; after this, her abdominal dropsy vanished and she became healthier. Starting in August, 2008, she began a different EM program, and the dropsy, which had recurred, disappeared, her hair turned darker, and she was able to travel. Three years after she’d been told she had months to live, she was very healthy, and she began to grow neglectful regarding the EM lifestyle; her dropsy reappeared and she was hospitalized. After this, she occasionally used EM in her life, received conventional treatment in the hospital, and passed away. Her body was donated to be autopsied, and the autopsy showed the cancer had not metastasized and that cancer was not the cause of death. The autopsy was performed so that her daughter could be convinced concerning the cause of death, and is a valuable source of information.
What we can draw from this information is that, as we saw with Mr. I, one should thoroughly apply the EM lifestyle to deal with diseases, and that complacency is the enemy. We are very grateful for the courage Ms. K’s daughter displayed in presenting this case study.

3. Progressive supranuclear palsy (PSP), similar to severe Parkinson’s, is an intractable disease for which there is no effective treatment.
The presenter, Mr. S (54), noticed symptoms at age 43 in 1999. In October, 2001 he was diagnosed with PSP at the local university hospital. In November, 2001, he began an EM lifestyle under the guidance of Dr. Ichiro Sugimoto. In August, 2002 he started a different EM program. As his symptoms improved, doctors at the university hospital gave him a different diagnosis, and in 2004 they admitted that this “is clearly not PSP.”
Now, when he is feeling good, he works three times as much as those around him (he work in stainless steel manufacturing). When there is a lot of stress at work, the symptoms of PSP re-appear (akinesia and a halting gait), but after he rests these disappear. PSP, like Parkinson’s and Spinocerebellar Degeneration, is supposedly related to brain function, and some people with the disease who have followed an EM lifestyle have seen dramatic improvement. Recently there are cases in which there has been excellent results in early-stage dementia, thought the mechanism is still not understood.

4. Hepatitis C
The presenter, Mr. O, is a 61 year old man from Nara Prefecture. In 2000 he was diagnosed with hepatitis C. In 2006, after receiving interferon treatments for 13 times, the side effects were so severe he gave up treatment. Starting in January 2007 he began using EM. By May of 2007, barely four month’s time, he was completely well.
Viruses are the cause of hepatitis C and B, which have become medical issues in Japan, and interferon, it is said, only cure 30-40% of cases, and side effects are a major problem.
EM has very strong anti-viral effects, and there are many reports showing how, when people introduce EM into their lives, viral hepatitis disappears within six months to a year. There are also quite a few reports indicating that with AIDS, too, CD4 count figures, which show the level of activity of the virus, are at those for healthy people, or even better. In other words, this proves that the helper T cells, which function to provide immunity against the virus, are functioning normally, and in the case of hepatitis C, indicate that EM strengthens immunity.

5. Breast cancer. Both breasts removed in 2004.  Radiation and anti-cancer drugs were used to treat patient, but in March, 2008 there was recurrence and metastasis.
The presenter was Ms. M (42) from Okinawa. When the cancer recurred, many small tumors were found in the supraclavicular and infraclavicular lymphs nodes, and in the lymphatic vessels, and the cancer had metastasized to the bones. She was also taking other supplements. In July, 2008 she began an EM lifestyle under the direction of Dr. Ichiro Sugimoto, and received advice on the use of EM in daily life. Two months later tumor markers had returned to normal levels, and seven months later PET scans revealed that the bone cancer had vanished. In her entire body now there is no indication of cancer, and her condition has remained stable up to the present.
One can say this person has been very fortunate, but what’s critical is maintaining the level of the EM lifestyle from here on. If Ms. M continues with the EM lifestyle, I am positive she can be healthy for the rest of her life, but she must never let down her guard.

6. Postoperative after effects of brain cancer surgery
Since the patient involved, Ms. K (31), still has many serious physical challenges, the doctor in charge, Dr. Katsura Tanaka, delivered the report. The patient first developed brain cancer in her teens, and for the next 12 years suffered from pneumonia, fevers, low body temperature, convulsions, and many other problems, and was in and out of the hospital. She began the EM-lifestyle in March, 2009. Her mother, too, enthusiastically adopted the use of EM, and her home vegetable garden is of professional quality. The patient’s body temperature is returning to normal, her many physical challenges are decreasing, and last year she was not hospitalized even once.
Considering these case studies, Mr. S’s PSP, and the case studies last year of Parkinson’s disease, one can say that EM has the power to normalize the functions of the brain.
The above are simple summaries of the reports of those who have experienced using EM. For more details on these cases please contact the following clinics: 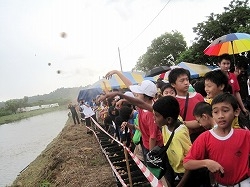 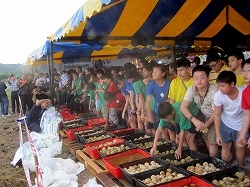 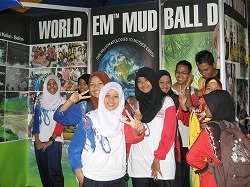